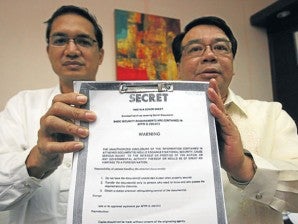 TOP SECRET COVER-UP. There’s nothing in the 10-inch-thick Mayuga Report that would warrant the “secret” classification. But what was obviously kept secret for the past 5 years was that the probers into military involvement in the 2004 presidential poll did not really probe but merely went through the motions.

Malacañang on Saturday told the retired generals who  figured in the “Hello Garci” recordings to attend the proposed House inquiry into alleged military involvement in election cheating in 2004—if they want to clear their names.

Deputy Presidential Spokesperson Abigail Valte said the Palace also would not stop Congress from summoning active officers to testify in the congressional probe, which would touch on the reported failure of a military commission headed by then Vice Admiral Mateo Mayuga to follow up leads on the involvement of some officers in electoral fraud.

A number of generals’ names were mentioned in the alleged wiretapped conversation between former President Gloria Macapagal-Arroyo and an election official believed to be former Commissioner Virgilio Garcillano.

Valte said it was up to the House of Representatives if it wanted to investigate on the generals whose names came up in the Mayuga Report.

“If they (the generals)  want to clear their names, what they should do is to go and participate,” said Valte over government-run radio station dzRB.

Told that former Armed Forces of the Philippines chief of staff Hermogenes Esperon, one of the officers whose names were heard in the controversial recordings, was willing to face a congressional inquiry, Valte said: “Well, at least he’s willing to go to Congress to explain.”

“And let’s see what his explanation would be,” she added.

Bayan Muna party-list Representatives Teddy Casiño and Neri Colmenares have asked the House to conduct an inquiry after they got a copy of the Mayuga Report and found that the military panel failed to pursue certain leads in investigating the role of some officers in the alleged rigging of the 2004 presidential election.

But Casiño on Saturday assailed the leadership of the House, which is dominated by Palace allies, for being “lukewarm” to the calls to investigate the military officers for their possible role in the fraud.

In a talk with the Philippine Daily Inquirer, Casiño specifically assailed the rules committee chaired by Majority Leader Neptali Gonzales II for his seeming inaction on House Resolution No. 1475 which he and Colmenares filed three weeks ago.

Casiño said the resolution had yet to be referred to committee to begin the public hearings.

A week ago, the two Bayan Muna representatives filed a second resolution calling for an inquiry into the reported 2005 break-in at the Batasan Pambansa by police personnel who switched election returns in House custody with fakes ones allegedly to favor Arroyo.

Speaker Feliciano Belmonte earlier suggested that any investigation on this be made by the Commission on Elections (Comelec) and the Department of Justice.

On Thursday, Gonzales said the House leadership would only focus on the break-in issue as it involved House security.

Casiño said he would file next week a complimentary resolution, this time on the Mayuga Report, and make the necessary intervention on the floor to “force the issue.”

Casiño wants to summon former Executive Secretary Eduardo Ermita, who reportedly called Brigadier General Raymundo Ferrer, then the commanding general of the 103rd Infantry Brigade, during the vote canvassing to supposedly complain that ex-Mayor Hajaron Jamiri of Taburan town was “not being treated fairly.”

Casiño wants Ermita to explain the context and intent of that call to Ferrer.

Casiño said he was still determining the identity of Arroyo’s lawyer who allegedly requested permission to land two helicopters in a military camp during the canvassing, based on the testimony of Army Colonel Rene Pilapil before the Mayuga Commission.

The 10-inch transcript of the proceedings, a copy of which was secured by the Inquirer, however, showed that the Mayuga panel  barely touched on the “Hello Garci” scandal. It questioned—and later cleared—four generals over their participation in alleged cheating in the 2004 presidential election.

The five-man panel, for instance, quizzed retired Lieutenant General Roy Kyamko, former head of the Southern Command, on the controversy only “out of curiosity,”

“Out of curiosity, would you like to comment on the Garci tape?” a panelist had asked Kyamko.

Kyamko responded by describing the source of the tapes as “questionable.” He read part of the (“Hello Garci”) transcript wherein an alleged conspirator claimed he had to “work with” him and Lieutenant General Hermogenes Esperon because another official, Brigadier General Francisco Gudani, was supposedly not being cooperative.

“Firstly, I don’t recall talking to Garcillano about Gudani although he was assigned in Lanao at the time of the election,” Kyamko told the panel, denying also that he had a hand in Gudani’s supposed relief from the province.

Following the brief response from Kyamko, Mayuga and other members of the panel moved on to a different topic.

Such was also the story in the case of Esperon, the deputy commander of Task Force Hope, which covered the work of deputized military officers in the 2004 elections.

In his unsigned statement, Esperon was asked a total of 27 questions, one of which sought a reiteration of his previous denial in an affidavit that he had anything to do with Gudani’s removal.

In a separate interview of Major General Gabriel Habacon, vice commander for operations of the Southern Command, Mayuga and company tackled a variety of subjects and barely touched on the “Hello Garci” controversy.

But the panel did ask about “reports describing the activities” of one colonel.

“The reports that reached me stated that he was talking to political personalities in Sulu and allegedly delivering the funds for the victory of their candidate,” Habacon said, but he noted that the information was contained only in “intelligence reports.” With reports from Cynthia Balana and Christian Esguerra