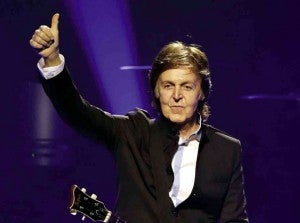 MCCARTNEY: I urge you, with all my heart, to direct that Mali be given that joy now. AP

The long and winding road for the campaign to get Mali out of Manila Zoo has taken another twist. And it comes with a little help from a music legend.

Singer and songwriter Paul McCartney has sent a letter to President Benigno Aquino asking him to end the “suffering” of the zoo’s lone elephant and let her enjoy a “well-deserved retirement,” according to the animal welfare group calling for Mali’s transfer to a nature sanctuary in Thailand.

In a statement on Friday, the group People for the Ethical Treatment of Animals (Peta) quoted the knighted former Beatle as saying: “I have heard from my friends at Peta that various government authorities are continuing to deny that Mali’s welfare should be within their jurisdiction.”

“I have great regard for governments that intervene on behalf of animals, just as yours did with the May 2012 directive ordering that Mali be evaluated and considered for transfer. That said, time is passing, and it has been more than a year since that directive was issued—yet Mali seems no closer to enjoying her well-deserved retirement at an approved sanctuary.”

“With the stroke of a pen, you (President Aquino) can bring an end to her suffering, and I urge you, with all my heart, to direct that Mali be given that joy now,” the British icon further wrote, according to Peta.

Reached for comment, Manila Mayor Joseph Estrada, who recently disclosed plans to rehabilitate the zoo and get two more elephants to be Mali’s companions, said: “It’s up to them, they have their own advocacy. I have my own principles.”

As to McCartney’s letter being addressed to President Aquino, Estrada stressed that the elephant “is not national property. She’s a property of the city.”

“Ibinigay sa atin yun, tapos ipamimigay natin? (The animal was given to us as a gift—and now we’re giving it away?) It will be very embarrassing. Imagine, can’t we take care of one elephant?” he added. 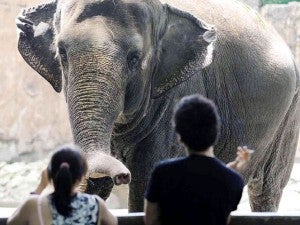 MALI keeps drawing visitors at Manila Zoo as the tug-of-war over her fate continues. AFP

Mali was a gift sent by the Sri Lankan government in 1977 to then First Lady Imelda Marcos.

Estrada reiterated that one or two more elephants will be donated by Sri Lanka and that investors from Singapore had proposed to modernize Manila Zoo for P2 billion.

“This is also for the youth, so they can get to see an elephant not just in movies or comic books,” he said.

Peta, which described Mali as “a 39-year-old solitary and ailing elephant held captive at the Manila Zoo,” earlier gained the endorsement of several foreign and local celebrities and artists for its advocacy.

The group had also tapped a growing list of animal experts in a bid to convince officials that moving Mali to a sanctuary would be in her best interest.

On Friday, it quoted another foreign specialist, Dr. Blair Csuti, senior editor of the book “The Elephant’s Foot: Prevention and Care of Foot Conditions in Captive Asian and African Elephants.”

Peta said Csuti recently spoke out for Mali to stress that her “transfer to a natural-habitat sanctuary … is the wisest and most [humane] action that Manila Zoo can take.”

“[It] can set an example for other institutions attempting to maintain captive elephants with insufficient resources.” With a report from Erika Sauler