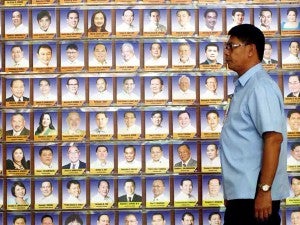 READY FOR THEIR CLOSEUP A staff member of the House of Representatives walks past a photo gallery of lawmakers at the main lobby, as security measures and other preparations get underway for President Aquino’s State of the Nation Address next Monday. ARNOLD ALMACEN

A Quezon City judge has denied a petition from the militant Bagong Alyansang Makabayan (Bayan) for a 72-hour temporary restraining order (TRO) against a City Hall directive which barred the group from holding a rally near Batasan Pambansa in connection with President Benigno Aquino’s State of the Nation Address on July 22.

Executive Judge Fernando Sagun Jr. said that “after careful consideration of the allegations contained in the petition, along with its enclosures, this office is not inclined to issue the 72-hour restraining order … and resolves to deny the same.”

Earlier this week, the city’s public order and safety department chief Elmo San Diego denied Bayan’s request to hold protest actions on Batasan Road near the House of Representatives, venue of the SONA. The city government also denied a similar request from Freedom from Debt Coalition, which planned to hold a rally near Ever Gotesco mall on Commonwealth.

Bayan denounced the directive as a grave abuse of discretion on the part of the city government, which insisted that Batasan and Commonwealth were “no rally zones.”

San Diego also cited possible traffic jams and sanitation concerns in denying the requests, but suggested a park at the City Hall complex as an alternative venue for the rallies.

Mayor Herbert Bautista has suspended classes in all elementary schools and high schools in Quezon City this Monday to ease traffic for the SONA.