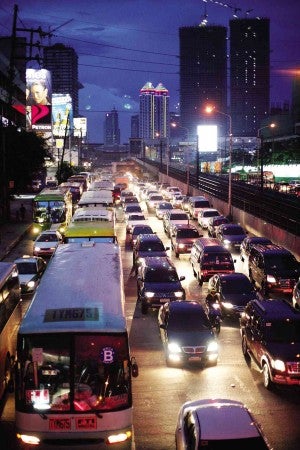 EDSA can only accommodate a maximum of 1,600 buses daily for traffic to be manageable, according to the MMDA, but city buses alone now number 3,600. KIMBERLY DELA CRUZ

The temporary transport hubs will be set up on the fringes of the capital as part of a long-delayed plan to ban provincial buses on Edsa and other busy thoroughfares.

The President issued the directive through Administrative Order 40, which he signed on July 16 and was made public by Malacañang on Thursday.

The interim transport terminals (ITTs) will be located at Trinoma Mall in Quezon City (for buses and AUVS in northern Metro Manila), Filinvest area in Alabang, Muntinlupa (southern) and Uniwide Reclamation Area in Parañaque (southwest).

The directive is expected to affect the daily routine of millions of commuters who pour in and out of the capital. The aim is to decongest the 24-km Edsa, where some 3,600 city buses pass every day out of the estimated 300,000 vehicles that use the highway.

The AO was issued following the release of a Japanese study showing that traffic congestion in Metro Manila results in potential income losses of P2.4 billion a day and amid mounting criticism over the government’s apparent lack of political will to solve the urban problem.

The temporary terminals will be used until permanent hubs north and south of Metro Manila are set up in 2016, as planned under Executive Order 67 which the President signed last year.

The plan for the permanent terminals is as follows: