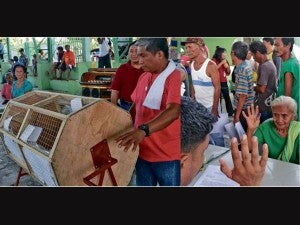 WHEEL OF FORTUNE The parcels of land that farmworkers will get in the sugar estate owned by the family of President Aquino are determined by lottery with the use of a “tambiolo” (raffle drum). Hacienda Luisita workers fall in line as the government starts distributing lot allocation certificates in the sugar estate. At right, Lucina Aquino, 68, was awarded one lot in her name. Earlier, she was granted custody of the lot in her late husband’s name. JO CLEMENTE/INQUIRER CENTRAL LUZON

HACIENDA LUISITA, Tarlac City—Each time the tambiolo was opened, a hush fell over the audience.

Years of legal battles, protests and even bloodshed for a parcel of land led to the single tambiolo (wooden raffle drum) set up on Thursday in the middle of a covered court in Barangay (village) Cutcut in this sugar estate.

The audience was composed of the families of farmworkers who were being given a share of the sugarcane plantation which they, their parents and grandparents had tended on behalf of the family of President Aquino.

The tambiolo contained white envelopes with the names of families who are beneficiaries of the government’s Comprehensive Agrarian Reform Program (CARP).

When a voice on a microphone called out Lot No. 1207, a DAR official pulled out an envelope that named Lucina Aquino as its new owner.

There was applause all around as Aquino, a 68-year-old widow, aided by her son, walked to a table nearby for the processing of papers for the land.

The DAR set up computers dedicated to the lot verification process and printed out the Lot Allocation Certificates (LAC), which were immediately awarded to the beneficiaries.

The beneficiaries were then required to swear before a DAR lawyer signifying that they agree to a payment scheme for their property.

Barangay Cutcut is one of 10 villages in the hacienda.

About 645 qualified beneficiaries live in this community and each beneficiary is entitled to 6,600 square meters.

Aquino received two lots, one in her name and another in the name of her late husband who had worked in the hacienda.

The DAR is dividing 4,099.91 hectares of Hacienda Luisita among 6,212 beneficiaries.

De los Reyes said the distribution of lot allocation certificates (LACs) after years of legal battles was not timed for President Aquino’s State of the Nation Address (Sona) on Monday.

The lot allocations were long overdue, he said, noting that he was not even aware that the President would mention the agrarian reform process in Hacienda Luisita.

While the beneficiaries could not choose the location of their land, they were given options. They could receive their lot allocations individually or as blocks of land when the beneficiaries are family members who want to stay and work together.

Some beneficiaries failed to consider that option.

Fernando Santiago found himself receiving a lot allocation that was far from the lot received by his wife after the raffle.

De los Reyes said individual land titles would be distributed by September. The DAR has scheduled a survey during the harvest season in October, when the sugarcane fields are cleared.

He said DAR personnel would plot the lands by putting muhon (survey markers) so farmers can identify the lots allocated to them.

But not all were happy about the developments in the land distribution in the sugar estate.

In a telephone interview, lawyer Jobert Pahilga, who represents Ambala, said the group would file a motion for clarification in the high court in connection with the allocation of only 4,099.91 ha.

Pahilga noted that the Supreme Court ruled in 2012 that agrarian reform should cover 4,335 ha of Hacienda Luisita.

He said Ambala would also ask the court to allow the appointment of an independent geodetic engineer to survey the area.

Pahilga said the group planned to pursue a legal argument it made before: that the farmers need not pay for the land they receive.

The man-hours that the farmers spent working on the fields should be equivalent to the value of these lots, he said.

According to DAR documents, three titles covering 5,149.5 ha of the hacienda represented all the lands that were covered by land reform.

But the DAR deducted from the coverage area lands that covered roads, cemeteries, creeks, easements, some residential areas and sections that were converted into or became part of the Subic-Clark-Tarlac Expressway (SCTex), leaving a final area of 4,099.91 ha for distribution.

Agrarian Reform Undersecretary Antonio Parungao, chief of DAR’s legal department, said the final amortization value of these lands would be issued by Land Bank of the Philippines, so many beneficiaries on Thursday had no inkling as to how much they owe the government.

But at a press conference, De los Reyes estimated that the farmers would pay between P60,000 and P70,000 for their lots, with the payment spread over 30 years.

Beneficiaries are prohibited from selling their lots within 10 years after the award.

Fr. Francis Lucas, executive secretary of the Episcopal Commission on Social Communications and Mass Media who joined the distribution process as an independent observer, described the exercise as “transparent and participative.”

The tambiolo system, while outdated, is a transparent method, according to Lucas. “My bigger concern is what happens next,” he said.

“The beneficiaries are farmworkers who do not have (knowledge of) the science of agriculture, unlike tenants who actually till the land. You are condemning your farmers to die if they remain just farmers and not entrepreneur-farmers. Follow through, therefore, is important,” he said.

“They must be given technical, credit and whatever support they need to make their lands more productive,” Lucas said.

De los Reyes assured the beneficiaries that the government would provide them with technical and other necessary support as they till their own land.

The lot allocations will continue until Aug. 21.