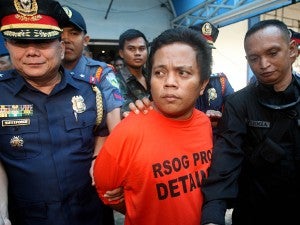 The witness to the suspected murders of two Ozamiz robbery gang leaders on Monday night is missing, the National Bureau of Investigation said Thursday.

“The witness and his entire family are now missing and the last who had custody of them was Quezon City Police Talipapa Station 3,” a senior NBI agent told the Inquirer in an interview.

The disappearance of the witness and his family while in police custody deepened investigators’ suspicions that high-ranking police officials on the take were behind the shooting deaths of Ricky Cadavero and Wilfredo Panogalinga Jr. in San Pedro town, Laguna province, Monday night.

Cadavero’s older sister, Rosalinda Cadavero, told the Inquirer on Thursday that he had paid off the warden and the prison guards at the national penitentiary in Muntinlupa City to allow him to escape last December and policemen in Cavite for protection afterward.

“They killed him for fear he would spill information about these payoffs,” said Rosalinda, 37, the slain gangster’s sister who returned to Manila on Tuesday from her job in Saudi Arabia after learning about his death at the hands of Cavite policemen.

The NBI found a witness who belied the Cavite police report that motorcycle-riding men attacked the police van carrying Cadavero and Panogalinga in a bid to spring the two prisoners.

During the attack, the police report said, the two prisoners tried to grab their escorts’ sidearms but were shot dead by the cops.

The witness said there were no motorcycles. At least four cars were involved, the first two blocking the police van and the other two blocking traffic from behind on the road near the gate to the KC Golf and Country Club in San Pedro.

The witness said a man from the first group of vehicles told him to leave, as there would be shooting there shortly.

As he was about to leave, the witness said he heard gunfire and ran home to hide.

The senior NBI agent said a team from the bureau escorted the witness’ father to the Iglesia ni Cristo (INC) compound on Commonwealth Avenue in Quezon City about 9 p.m. Wednesday to meet his family there.

Members of the family were still at the gate of the compound when the NBI team arrived, the agent said.

“Based on the statement of the mother, the INC did not want to be involved because she was no longer a member, as she had married a Catholic,” the agent said.

While the NBI team was talking to the family, a group of policemen from Talipapa Station 3 led by Insp. Jun Fortunato arrived and insisted that his group should have custody of the witness, the agent said.

“We were ordered to back off to avoid unnecessary heated confrontation but ensure safety and proper exchange of custody of the witnesses,” the agent said.

“We yielded to the police because another police official, a Major Quiland, arrived and assured us that the witnesses would be under police protection,” the agent said.

“The police wanted to take us to the station, but we declined and, to avoid a heated argument, we yielded to their request,” the agent said.

But after a check Thursday morning and after talking to Commission on Human Rights lawyer Jackie de Guia, the NBI learned that the witness and his family did not stay at the Talipapa police station but were taken to the house of a brother of the witness in Caloocan City, the agent said.

The NBI verified the information and learned that the family was indeed taken there on Wednesday night but also left around 5 a.m. the following day.

“We were told the family could not be found and we are now looking for them,” the agent said.

The NBI is investigating the killings of Cadavero and Panogalinga and initial findings tended to suggest a police rubout.

The NBI is looking into reports that Cadavero withdrew P3.5 million from a bank before he was supposedly recaptured last Friday.

Rosalinda and her mother, Luzviminda, of General Santos City, admitted that Cadavero, 36, took to crime in pursuit of money.

“But where did it go? Look at this, he had not left even a single cent to pay for his burial,” Rosalinda said in an interview at a funeral parlor in Muntinlupa City where Cadavero’s body was being autopsied.

“All the money he had stolen went to them (warden, prison guards and Cavite police),” she said.

She said her brother told her during a phone conversation last December that he paid the warden of New Bilibid Prison P500,000 and the jail guards P200,000 each.

“They allowed him to slip out of (prison) easily,” Rosalinda said, contradicting the police report in December that three men posing as Cadavero’s visitors fired at the guards at the prison’s reception and diagnostic center, where he was being held while waiting to be transferred to the main compound.

Chief Supt. Benito Estipona, Calabarzon (Cavite, Laguna, Batangas, Rizal, Quezon) regional police commander who was sacked on Wednesday for the shooting deaths of Cadavero and Panogalinga, complained at the time that the escape, which happened 6 a.m. on Dec. 8, was reported to the police three hours later.

“I was the (Southern Police District) commander then, but the activities of the unit commander were his own,” he said, referring to Supt. Danilo Mendoza, who was chief inspector at the time Cadavero was first arrested in Cavite in October last year.

When Estipona became Calabarzon police director, Mendoza was promoted to commander of the Regional Special Operations Group (RSOG), the unit that was transporting the Ozamiz gang leaders when they were killed on Monday night.

“We don’t use the word ‘warden,’” Bucayu told the Inquirer when reached for comment. “The head of the guards is called commander of the guards so I find the statement that Cadavero bribed the warden and the guards confusing.”

Bucayu said that while he was not yet the corrections

bureau chief when Cadavero escaped, he also wanted to investigate the gangster’s case.

“Maybe the bribery did not happen on our lot,” he said.

Rosalinda said that after escaping from prison, her brother roamed around Cavite without fearing arrest.

“Our last conversation was on June 14. I was in Riyadh and I called him. He was driving at the time, and I told him to stop taking on illegal jobs and to be careful when going out. He was just out of Bilibid and the authorities could still be searching for him,” Rosalinda said.

“He said, ‘I’m not afraid. I already paid off all of the policemen in Cavite,’” Rosalinda said.

But who and how much, Cadavero did not say.

When she saw her recaptured brother on television pleading with the Commission on Human Rights for help, she said she knew he was already a dead man.

“He would no longer be kept alive because he knew so many things about the involvement of the police officers and jail guards,” she said.

Cadavero and Panogalinga were shot dead by their police escorts when they purportedly tried to grab their sidearms while being transported to Cavite on Monday night.

The Calabarzon police reported that motorcycle-riding gunmen attacked the police van carrying the prisoners to spring them.

They claimed that the two prisoners tried to grab their escorts’ guns during that attack but were shot dead.

Justice Secretary Leila de Lima said she smelled “something fishy” about that report and angrily demanded an explanation from the Philippine National Police. She also ordered the NBI to look into the killings of Cadavero and Panogalinga.

Malacañang has seen signs of a rubout in the killings, with presidential spokesman Edwin Lacierda citing the statement of an eyewitness who told the NBI what he had seen on the night of the shootings in San Pedro town, Laguna.

“Certainly, we welcome the surfacing of the witness to what (appears to be) a rubout,” Lacierda told reporters on Thursday.

Director General Alan Purisima, chief of the Philippine National Police, told a news conference on Thursday that the witness’ testimony is vital to the investigation.

Purisima promised that no one would be spared in the search for the truth about the killings of Cadavero and Panogalinga.

Fifteen policemen, including Estipona and Mendoza, were sacked and would be questioned about the shooting deaths of the two gangsters.

During Cadavero’s arrest in Cavite on Oct. 12 last year (together with his live-in partner Fe Tolentino and two other suspected members of the group identified as Randy Maratas and Avelino Lagata), the Southern Police District said the gang leader had P1.2 million in three bank accounts, three sport utility vehicles—a Mitsubishi Montero, a Honda CRV and a Toyota Innova—which the arresting team led by Mendoza seized from him.

Rosalinda said all of her brother’s loot—the cash amounting to P1 million, money in the bank, and the vehicles—were taken by policemen from the SPD.

After the arrest, Luzviminda said Mendoza told her wryly that she should thank the police for keeping her son alive “despite an order from the top to kill him.”

Luzviminda and Rosalinda are both asking the police: “Where are the millions and the vehicles?”

Rosalinda said the police had no right to execute her brother even if he was a known criminal.

“Even if he was a criminal, he still had the right to live even behind bars,” she said.

Rosalinda said she and her family were leaving the filing of charges up to the government, as they had no resources to press the case.

“We don’t know where to get the money for the funeral expenses and bringing his body from Manila to General Santos. How can you expect us to hire a lawyer?” she said.—With reports from Michael Lim Ubac, DJ Yap in Manila; and Maricar Cinco, Inquirer Southern Luzon