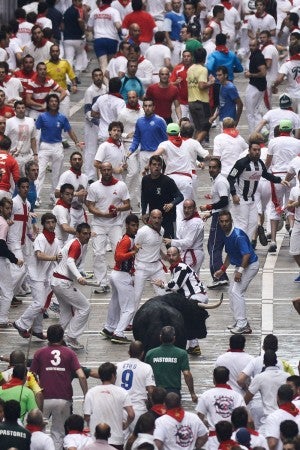 PAMPLONA – Three men were gored by half-ton bulls as they raced through Spain’s northern city of Pamplona, the bloodiest run of this year’s celebrated San Fermin festival.

The three runners, a 20-year-old American and two Spaniards aged 31 and 42, were all raced to a hospital.

The extent of their injuries, the first gorings of this year’s festival, was not immediately known, a Navarra hospital spokesman said.

Another three people, including a 48-year-old American, were taken to hospital with injuries suffered in falls during the sixth bull run of the hugely popular festival.

The run turned dangerous when a half-ton black bull, part of the galloping herd of six sharp-horned bulls and six steers, separated and began charging into runners.

The lone bull charged one young man and tossed him around the ground in a 30-second tussle, causing the daredevil’s pants to come off. The man clung to one of the bull’s horns while two runners tried to pull the animal away by the tail.

Two others then grabbed the young man by the feet and pulled him to safety.

An isolated bull is considered a more dangerous beast because it can become disoriented and is more likely to charge runners.

“A lot of people fell along the route, it was really dangerous,” said Alan Carpenter, a 38-year-old banker from Chicago after taking part in his third Pamplona bull run.

Hundreds of runners, most dressed in white with red kerchiefs, joined in the 848.6-meter (928-yard) dash through the city’s winding, cobbled streets from a corral to the bull ring.

The six bulls from the El Pilar ranch in the province of Salamanca completed the course in four minutes and 57 seconds, the slowest bull-fun so far this year.

The animals, which weigh between 510 and 575 kilos, will be killed by matadors in an afternoon bullfight.

The early morning bull runs are the highlight of the San Fermin festival, which was immortalized in Ernest Hemingway’s 1926 novel “The Sun Also Rises” and now draws hundreds of thousands of tourists.

Fifteen people have been killed in the bull runs since records started in 1911.

The most recent death took place four years ago when a bull gored a 27-year-old Spaniard in the neck, heart and lungs.