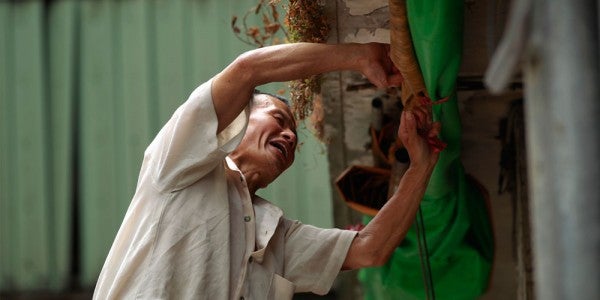 A local fishmonger secures an awning above his shop at a harbor of Suao, north eastern Taiwan, Friday, July 12, 2013. Taiwan is closing schools and deploying soldiers to help with evacuations Friday as the approaching Typhoon Soulik threatens to bring strong winds and heavy rains to the island. AP Photo/Wally Santana

TAIPEI – Hundreds of villagers were evacuated and schools and businesses shut down in Taiwan Friday as it prepared for the arrival of Typhoon Soulik, expected to pound the island with powerful winds and heavy rain over the weekend.

Offices and schools closed in Taipei and eight other cities with residents advised to stay indoors as the typhoon churns towards the island.

Packing winds of up to 209 kilometers an hour (130 miles), Soulik is expected to make landfall on the north-east coast around 3 a.m. Saturday , the Central Weather Bureau said.

The bureau downgraded Soulik from a super typhoon to a moderate typhoon but warned residents across the island to prepare for “extreme torrential rain” — classified as 350mm (13 inches) within 24 hours — and rough seas.

More than 600 residents were evacuated from six low-lying aboriginal riverside villages outside the capital city on Friday morning.

In Wuchieh, a township in the northeastern Yilan county — which is forecast to bear the brunt of Soulik — over 2,000 sandbags were snatched up by residents and two amphibious military vehicles deployed for rescue.

Waves as high as 1.5 meters were hitting the shore in Yilan on Friday afternoon as coastguards patrolled the beach to warn visitors to stay away while hundreds of fishing boats sought shelter.

“Many farmers have harvested rice, fruits and vegetables early as the typhoon is expected to impact our area,” said Huang Hai-tao, an official in Jiaosi, a popular tourist destination in Yilan.

“The typhoon has also caused some damage to tourism as more than 90 percent bookings for this weekend have been cancelled.”

More than 2,000 tourists had already been evacuated from the remote Green Island, south east of Taiwan, on Thursday.