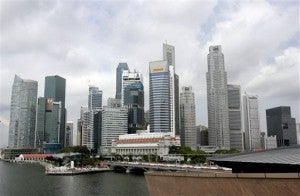 SINGAPORE – Suicides in Singapore hit an all-time high of 487 in 2012 as more young people bogged down by stress and relationship woes took their own lives, a charity group dealing with the problem said Friday.

The tally, a 29-percent increase from the 2011 total, was boosted by an 80-percent rise in the 20-29 age bracket, the Samaritans of Singapore (SOS) said in a statement.

“These include unemployment, stress with studies or work, financial worries, family life, and struggles with social interactions and feelings of loneliness.”

Christine Wong, executive director of SOS, said young people under stress “tend to hide their pain behind a facade, not knowing where, how or who they can approach for help”.

“People around them may not be aware of their distress and are hence unable to provide the support needed,” she said in the statement.

Wong added that the community should play an important role in “de-stigmatizing” suicide by encouraging those under stress to talk about their struggles and suicidal feelings.

Suicide cases have consistently hovered around two percent of total deaths in Singapore, an affluent city-state of 5.3 million residents known for its pressure-laden school system.

Suicide is an offense in the compact island-state, and anyone who survives an attempt faces a jail term of up to a year, a fine or both.

The number of suicide attempts is five times higher, it said, with five percent of the people in the world having tried to kill themselves at least once during their lifetime.