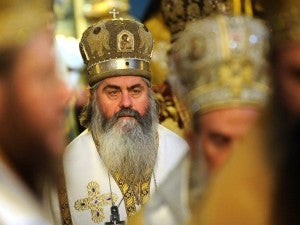 This photo taken on January 21, 2012, shows the Bishop of Varna and Veliki Preslav, Kiril, during an orthodox Mass in Alexander Nevski cathedral in Sofia. Kiril, a powerful Bulgarian Orthodox Church bishop, was found drowned on a beach near the Black Sea city on Tuesday, July 9, 2013, local police and hospital sources said, adding he might have been killed. AFP PHOTO/NIKOLAY DOYCHIN

SOFIA—One of Bulgaria’s most powerful and controversial Orthodox Church bishops was found dead Tuesday on a Black Sea beach, authorities said, dismissing early media reports that there might have been foul play.

The 59-year-old Metropolitan Kiril, a man who had spied for the communists and had a taste for luxury cars, was believed to have died from drowning, Varna regional prosecutor Tsvetanka Getsova told BNR radio.

She said an autopsy of the body showed no other trauma.

“For the time being there is no data whatsoever that it (his death) was violent,” the prosecution added in a separate statement.

“The information in the mass media of a violent death is not confirmed in any way at this stage by the Varna police,” the Orthodox Church also said.

Kiril’s body—wearing a scuba mask and snorkel—was recovered from the sea near a church residence in his diocese city of Varna on Tuesday morning after a man spotted it and alerted police, the prosecution said.

It has now opened a probe and has started to question witnesses to determine the cause and circumstances of Kiril’s death.

The bishop was a good swimmer and Getsova said the autopsy found he was perfectly healthy. He suffered neither a heart attack nor a stroke, she told BNR radio.

The Orthodox Church had announced the death in a short notice on its website: “This morning the body of Metropolitan Kiril was found in a seafront area near Varna. The information was confirmed by the local police.”

An energetic leader, Kiril was one of the most prominent bishops in the Bulgarian Orthodox Church, often sent to represent the country abroad and acting as the main interlocutor in talks with other religions.

He also took the Church’s top job on an interim basis between November 2012 and February 2013, after the death of long-time Patriarch Maxim.

However, he was also quite a controversial figure.

Last year he was exposed as a former spy for Bulgaria’s notorious Communist-era secret service—he used the aliases “Kovachev” and “Vladislav”—along with 11 other bishops.

In 2011, the gray-haired Kiril also prompted anger after appearing at an Easter Mass in a top-of-the-range Lincoln MKZ hybrid car, bragging only he and US President Barack Obama had such a vehicle.

He said the posh sedan, which he continued to use, was a present from a businessman.

Well-known for his business sense, Kiril was also suspected of carrying out shady deals with church property.

He was the Bulgarian Orthodox Church’s envoy to Moscow under communism and became the bishop for the Varna metropolitan area shortly before the fall of the regime.

On Tuesday, bells in the city tolled throughout the day for his death.

The Orthodox Church is the main religion in Bulgaria with some 6.4 million worshippers in a country of 7.3 million.

Kiril will be laid to rest in Varna on Thursday, his office said.