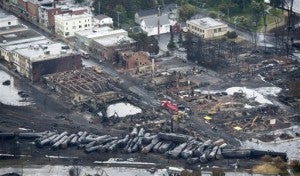 LAC-MEGANTIC — The number of dead or missing after the runaway oil tanker train disaster in a small Canadian town has risen to 60, police announced Wednesday, as the railway chairman headed to the scene.

Ten more people were however added to a growing list of missing or presumed dead in Lac-Megantic, scene of the worst train accident in recent Canadian history.

Part of Lac-Megantic was flattened in an inferno caused by the crash Saturday, as a wall of fire tore through homes and businesses in the town, located east of Montreal near the US border.

The blaze forced about 2,000 residents to flee their homes in the town, which is home to 6,000 people. Most of them started returning on Tuesday.

The freight train operated by Montreal, Maine & Atlantic Railway had been stopped for a crew change in the nearby town of Nantes when it began to roll downhill without a conductor towards Lac-Megantic.

It derailed at a curve in the tracks and several cars exploded.

MMA chairman Edward Burkhardt has blamed firefighters in Nantes for the disaster, saying they unwittingly unlocked the train’s brakes when they shut down the locomotive’s engines to douse a small fire.

Burkhardt is likely to face angry residents and questions from police probing for criminal negligence when he arrives in Lac-Megantic to survey the devastation.