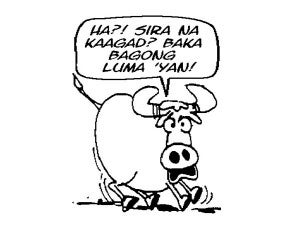 One of the eight newly acquired W-3 Sokol helicopters that was to have flown Defense Secretary Voltaire Gazmin to the 66th anniversary celebrations of the Philippine Air Force (PAF) at Clark Air Base in Pampanga on Monday has remained grounded at Camp Aguinaldo, hobbled by a weak battery.

“Its primary mission last July 1 was to ferry and pick up the secretary of national defense and party. There were two,” he said, adding that military helicopters often fly tandem.

Gazmin and his party were able to take off for Clark after another Sokol was dispatched to Camp Aguinaldo when the pilots of the first helicopter detected the systems problem.

The W-3 Sokol is a medium-size, twin-engine and multipurpose model made by Polish helicopter manufacturer PZL-Swidnik.

“This is a minor discrepancy in the aircraft. In this case, the battery was weak. There are some electrical discrepancies but these are not showstoppers,” Okol said.

He said the PAF expected the Sokol to fly again “in a few days and proceed back to its station and it will perform its operations.”

Grounding the Sokol, with Tail No. 310925, is a “precautionary measure” until the technical representatives of PZL-Swidnik arrive, he said.

Since the aircraft is still under warranty, the PAF has coordinated with PZL-Swidnik to “troubleshoot” the aircraft with the local Air Force maintenance crew.

“There’s really no cause for alarm,” Okol said.

The new helicopters have been performing search-and-rescue operations although they have yet to be painted white with bright yellow markings because they are still under warranty and thus cannot yet be altered, he said.

Lt. Col. Ramon Zagala, spokesman for the Armed Forces of the Philippines, said he was told that a test flight was done on the Sokol.

“It took off but apparently it was a systems problem that they detected. I was informed that the Air Force didn’t want to bring it back to Villamor Air Base even if it could fly because what was paramount was the safety of the crew and its passengers,” Zagala told reporters at Camp Aguinaldo.

The eight Sokol helicopters were purchased by the Department of Defense for P2.8 billion under the government’s upgrade program for the military.

In his address at the PAF anniversary celebrations, President Aquino blasted previous administrations for neglecting the military and vowed to spend P75 billion to modernize its defense capability in five years.

“While we look back at the rich history of the Philippine Air Force, there is one thing that is noticeable: While we, in 1963, had the capability to help and send squadrons to other nations, why is it that in the last decades, it seemed that the wings of our Air Force had been clipped, and we rely only on old, rickety planes and equipment?” Aquino said.

No, he hasn’t been told about the grounded new chopper.