Halving world hunger by 2015 ‘within reach’—UN 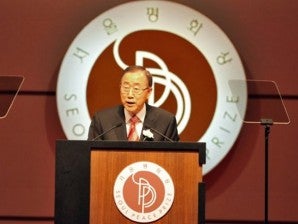 GENEVA – Despite economic crises and dwindling aid, the UN said Monday huge progress had been made towards meeting the so-called Millennium Development Goals, including its bid to slash world hunger in half between 1990 and 2015.

“Given reinvigorated efforts, the target of halving the percentage of people suffering from hunger by 2015 appears within reach,” said a UN progress report on its eight Millennium goals.

Thirteen years ago, world leaders drew up the MDG’s, with specific targets to reduce poverty, stop the spread of AIDS and improve education, gender equality, child and maternal health and environmental stability.

UN chief Ban Ki-moon hailed the progress made, insisting in Monday’s report that the goals “have been the most successful global anti-poverty push in history.”

The MDG target of cutting in two the number of people living in extreme poverty, defined as subsisting on less than $1.25 a day, was reached already in 2010 — five years ahead of schedule.

The report also stressed major advances in health, pointing to strides to rein in the HIV/AIDS epidemic, as well as drops in the death rates from malaria and tuberculosis, saving more than 20 million lives.

Less than 1,000 days from the cut-off date, all was not rosy, however.

Ban pointed out that “too many women die in childbirth when we have the means to save them (and) more than 2.5 billion people lack improved sanitation facilities.”

“Our resource base is in serious decline, with continuing losses of forests, species and fish stocks, in a world already experiencing the impacts of climate change,” he added.

One in eight people around the world are still chronically undernourished, and more than 100 million, or 16 percent of kids under the age of five are underweight.

But Monday’s report also pointed out that the proportion of undernourished people in the world fell from 23.2 percent in 1990-92 to 14.9 percent in 2010-12, and that there were today 59 million fewer children under five who were underweight than in 1990.

Despite the significant drop, the UN report stressed that “the rate of progress is insufficient” to reach the target of halving the number of hungry people by 2015.

But progress had been “more pronounced than previously believed,” it said, insisting that if the world hit the accelerator in its bid to root out the scourge of hunger, the 2015 target could be reached.

Noting that progress towards the Millennium goals had been uneven, the UN report urged the international community to smooth out the disparities between regions and countries, as well as between population groups within countries.

The report also warned that the world’s ability to reach its goals had been impacted by dwindling aid money, with global aid funds falling two percent from 2010 to 2011 and another four percent in 2012, to $126 billion.

But this too was unevenly distributed, with aid to the least developed countries shrinking a full 13 percent last year alone, to about $26 billion.

The report called on the world to look beyond 2015 and begin crafting “an ambitious, yet realistic, agenda for the period after the MDG target date.”