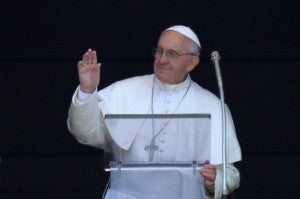 VATICAN CITY — Pope Francis is launching a sweeping study of the scandal-plagued Vatican bank under an expected clear-out of top management at the Holy See, the Vatican revealed on Wednesday.

The pontiff is to take a hands-on approach, ensuring that everything a special five-member commission uncovers will be reported directly to him.

The 76-year-old is particularly keen to “better know the judicial position and activities” of the Institute for Works of Religion (IOR), as it is known, which has struggled to shake off its murky image amid persistent reports of shady dealings.

The bank has a troubled history, which includes the collapse of the Banco Ambrosiano, in which the Holy See was the main shareholder, and had been accused of laundering money for the Sicilian mafia.

The chairman of Banco Ambrosiano, Roberto Calvi — dubbed “God’s Banker” in the press — was found hanging from Blackfriars Bridge in London in 1982 in a suspected murder by mobsters.

The Vatican has promised to redouble its efforts to reform the bank and overhaul its financial legislation following reports of anonymous accounts at the bank being used by organized crime.

Pope Benedict XVI in 2011 created a new financial authority to reform the bank, with the aim of getting the Vatican on a “white list” of countries that cooperate with efforts against money laundering drawn up by the Organization of Economic Cooperation and Development (OECD).

But critics complained that his approach was toothless and many are watching to see whether Francis will overhaul the highest rungs of the institution.

The zeal with which Francis has taken to attacking financial institutions globally since being elected pontiff in March has raised new questions about the future of the IOR and to what extent it will be affected by general wide-sweeping reforms to the Holy See.

The pope, elected amid criticism of the way top management by priests at the Vatican functions and some calls for widespread reform, has railed against the cult of money, calling for a “poor Church.”

He has also quipped that “St. Peter did not have a bank account,” and warned the IOR and other Vatican staff that “offices are necessary but they are necessary only up to a certain point.”

Earlier this month, Francis named cleric Battista Mario Salvatore Ricca to oversee the IOR’s management — effectively placing a trusted ally in a key position to report to him.

The new committee, headed up by Cardinal Raffaele Farina — former archivist of the Vatican’s Secret Archives, will be made up of four prelates and Harvard law professor Mary Ann Glendon.

The IOR, which does not lend money, manages assets of 7.0 billion euros ($9.3 billion) and handles funds for Vatican departments, Catholic charities and congregations and priests and nuns living and working around the world.