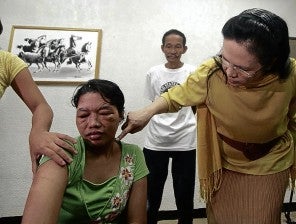 Bonita Baran shows the injuries she suffered from years of maltreatment by Reynold and Analiza Marzan whom she worked for as a housemaid. Baran, who lost most of her vision, has sued the couple for attempted murder, physical injuries and serious illegal detention. CONTRIBUTED PHOTO

The housemaid who was allegedly locked up for three years and subjected to abuse until she went blind turned down Wednesday a compensation offer of P500,000 from her former employer who had expressed her intention to plead guilty to a lesser offense.

“No amount of money will be enough to compensate for my blindness. I want justice. I will never agree to a settlement.” Bonita Baran told the Philippine Daily Inquirer.

Following Baran’s decision, the lawyer for Analiza Marzan, who together with her husband Reynold, is accused of maltreating their former housemaid, has withdrawn his client’s offer.

Baran said in an interview that when she was first offered the money during a chamber conference in March, she refused it.

This was after the Marzans’ lawyer, Joel Ferrer, asked for a meeting during the pretrial conference held at the Quezon City Regional Trial Court Branch 77 to discuss the possible settlement of the case’s civil aspect based on Baran’s supplemental affidavit in which she asked the court to award her over P1.9 million in damages.

A chamber conference is a closed door meeting called between the parties in a lawsuit when a successful mediation is considered unlikely. It is held in front of a judge.

On Monday morning, another pretrial hearing was held during which Ferrer announced Marzan’s offer to plead guilty to Article 274 of the Revised Penal Code (RPC) as part of a plea bargain.

Under the RPC provision, the penalty of arresto mayor in its maximum period to prision correccional in its minimum period (six months and a day to two years and four months) would be imposed on any person “who, in order to require or enforce the payment of a debt, shall compel the debtor to work for him, against his will, as household servant or farm laborer.”

Right now, Marzan faces a serious illegal detention charge which is punishable by reclusion perpetua or at least 30 years of imprisonment.

Judge Germano Francisco Legaspi reset the pretrial proceedings to July 29 to give way to the plea bargaining between the parties who again met after Monday’s hearing to discuss the defense panel’s offer.

Baran told the Inquirer that she had also refused the offer for Marzan to plead guilty to a lesser offense. “I told them I would not accept any offer [for a settlement]. I am pushing through with the case until I get justice for what happened to me,” she said.

The possibility of a plea bargain on the criminal and civil aspects of the case came up after Baran submitted in March a supplemental sworn statement, along with the prosecution panel’s pretrial brief, in which she asked for over P1.9 million in damages from the couple.

The Marzans are facing charges of serious illegal detention for allegedly locking up Baran in their home at Las Villas del Cielo on Visayas Avenue from 2009 to 2012. During that time, the maid says she was subjected repeatedly to physical abuse until she became blind.

The couple have also been charged with seven counts of serious physical injury and two counts of attempted homicide in another court.