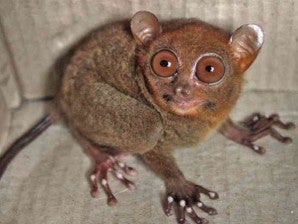 Tarsier was scheduled to fly home to Bohol on Thursday, June 27, 2013. RAFFY LERMA

What began as an odd, amusing tale of a tiny creature finding its way to the big city has turned out to be a sad, short-lived one.

The tarsier discovered at Manila Golf and Country Club in Makati City five days ago was found dead in its cage on Wednesday afternoon at the Ninoy Aquino Wildlife Rescue Center in Quezon City, officials said.

How the tarsier got to the golf club in Forbes Park remains a mystery.

Until its death, the little creature had appeared healthy and active, said Director Theresa Mundita Lim of the Protected Areas and Wildlife Bureau.

“Its big appetite raised our hopes that it would be able to survive,” she said, expressing deep disappointment over the fate of the tarsier, an endangered species protected by wildlife law.

Endemic to the Philippines, tarsiers are nocturnal creatures that live on a diet of small lizards, frogs and insects. They have thin, rough fur, whose color ranges from gray to dark brown. Tarsiers communicate with each other using loud piercing notes.

The primate was found by a caddie on June 21 perched on the branch of a tamarind tree at the golf course located inside the posh Forbes Park.

Although shy, the tarsier had shown no sign of stress and was eating well in the small cage, where it was kept, often hidden among the leaves and branches that simulated its natural habitat. It had been fed mealworm, the recommended substitute for insects for insect-eating animals in captivity.

Lim said the tarsier was to have been flown on Thursday to Bohol, where officials intended to keep it in a semi-captive environment before its possible reintroduction to the wild.

“I am so disappointed because we really thought it was going to make it. We already arranged everything, including the flight to Bohol,” she said.

A wildlife caretaker under the supervision of the attending veterinarian, Esteven Toledo, was looking after the tarsier before it was found dead at about 1 p.m., Lim said.

She added that the animal had appeared fine when the caretaker checked in the morning.

The cause of death is still not known. Lim said her agency would coordinate with the Bureau of Animal Industry to perform a necropsy to find out why the tarsier died.

“We don’t know if it had any preexisting condition before we took it in. Unlike domestic animals like dogs or cats, we could not really do a thorough health check because we didn’t want to stress the anima,” Lim said.

The necropsy should tell officials if the tarsier was malnourished or suffering from any other ailment.

Lim said the tarsier’s fur had appeared scruffy and its strong appetite might indicate that it had been starving before it was discovered at Manila Golf.

“Perhaps the lesson here is we should have arranged for it to be taken to Bohol immediately after it was rescued,” Lim said.

The discovery of the tarsier in the golf course had prompted an investigation of how it found its way there. There are no registered tarsier owners in Metro Manila.

Lim speculated that a tourist might have pocketed the animal and was keeping it as a pet before it escaped.

The tarsier was not given a name although there were plans to name it, Lim said. “Maybe it’s for the best that we didn’t give it a name or we would have grown more attached to it,” she said.

Keeping wildlife, especially an endangered species like the tarsier, is illegal, except among registered breeders and wildlife farms.

The Philippine tarsier (Tarsius syrichta) is one of the smallest known primates in the world, growing no larger than an adult person’s hand.

In 1986, the Philippine tarsier was listed as “endangered” by the International Union for Conservation of Nature (IUCN) Conservation Monitoring Center.

A check with the IUCN Red List of Threatened Species currently lists the tarsier as “near threatened.”

A number of laws have been adopted to protect and conserve the Philippine tarsier, among them the Department of Environment and Natural Resources’ Administrative Order No. 48, which included the creature as a protected species among other endangered animals.