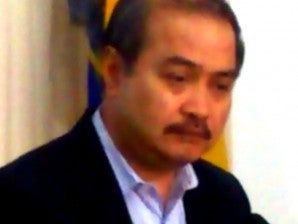 MANILA, Philippines—The arrested suspect in the killing of Batangas Assistant Provincial Prosecutor Alexander Sandoval tagged the husband of a former Batangas town mayor as the brains behind the murder.

Sandoval was shot dead by two motorcycle-riding gunmen along a highway in Barangay Muzon in San Luis town, near the boundary of Sta. Teresita, around 11 a.m. Thursday.

The Integrated Bar of the Philippines condemned the attack.

“There have been too many deaths, too many have resorted to acts of violence to subvert the ends of justice and we are taking action now,” the IBP through its executive vice president and incoming president Vicente Joyas, said in a statement.