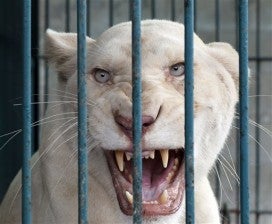 A lioness bares its teeth inside an enclosure after a raid at a zoo-like house on the outskirts of Bangkok, Thailand Monday, June 10, 2013. Thai police and forestry officials searched and seized a number of imported and endangered animals including 14 lions from Africa and arrested the house’s owner.

BANGKOK — Thai police found 14 albino lions imported from Africa and hundreds of other protected animals in a warehouse near Bangkok and have arrested a pet shop owner.

Birds, meerkats, tortoises, peafowls, capuchin monkeys and other species from overseas and Thailand were found at the warehouse, police Col. Ek Ekasart said.

They said Montri Boonprom-on, 41, faces charges of possessing wildlife and carcasses and could face up to four years in jail and a fine of 40,000 baht ($1,300).

Montri told reporters the lions were shipped legally and were to be transferred to a zoo in Thailand’s northeast. He did not explain why only 14 lions remained at his warehouse, while the documents showed he had imported 16.

Thailand is a hub of the international black market in protected animals. While the country is a member of a convention regulating international trade in endangered species, Thai law does not extend protection to many alien species.

Police also found a hornbill and a leopard, both protected by Thai law, which were packed in a box and were scheduled to be delivered to clients on Monday.

“We have been monitoring the location for a few days after the neighbors complained about the noise from the animals,” Ek told reporters during the raid in a residential area of Bangkok’s Klong Sam Wa district. “And if you looked through the gate, you could spot lions in the cage.”

The animals were confiscated and will be under the care of the Department of Natural Parks, Wildlife and Plant Conservation.

ADVERTISEMENT
Read Next
Stand up to hazing
EDITORS' PICK
China fortifies virus defenses as deaths hit 65
Batangas governor urged to rescue abandoned animals on Taal island
Get exciting deals and discounts when you download the new McDonald’s App
‘A greener, cleaner tomorrow’: A how-to guide for Filipinos who want to help with today’s energy crisis
SM continues to send relief assistance to remote towns in Batangas
Residents of Batangas towns on lockdown except Agoncillo, Laurel may return home
MOST READ
Slain maid’s kin reject P59-M blood money
BREAKING: Taal Volcano’s status lowered to Alert Level 3
Ex-envoy warns: Scrapping VFA will benefit China
The global spread of the coronavirus: Where is it?
Don't miss out on the latest news and information.