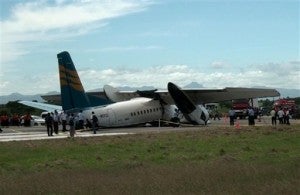 In this photo made off video camera, the wreckage of a Chinese-made Xian MA60 twin turboprop aircraft operated by state-run Merpati Nusantara Airlines lies on the runway after it landed hard at El Tari airport in Kupang, East Nusa Tenggara, Indonesia, Monday, June 10, 2013. The plane reportedly landed hard, slamming both engines onto the runway at the airport in eastern Indonesia on Monday. Some passengers were injured but no one died. (AP Photo)

YANGON, Myanmar — A Myanmar Airways flight had a minor landing mishap on the same day as an Indonesian flight involving the same model of Chinese-made twin turboprop aircraft. Neither accident caused any deaths.

Monday’s accident in Myanmar was the third there since late December and comes as tourism booms in the country that’s instituting democratic changes and exercising more economic freedom after Western nations lifted longstanding sanctions.

Myanmar state television showed the scene of the bad landing in Kawthaung in southeastern Myanmar. National police said on Facebook that the aircraft carrying four crew members and 60 passengers swerved off the runway upon landing. The flight from Mawlamyine had originated in Yangon, the country’s biggest city.

The report said the state-owned airline’s plane came to a stop in bushes about 200 feet to the west of the runway, with smoke coming from the left side propeller housing. It said the propellers on both wings were damaged. It said there were no injuries. Civil Aviation Department Assistant Director Nwe Ni Win Kyaw confirmed the accident but said she could not yet provide further details.

In Indonesia, aviation authorities said a MA60 operated by state-run Merpati Nusantara Airlines landed hard at the airport in the East Nusa Tenggara provincial capital of Kupang, slamming both engines into the runway. Airport authority head Imam Pramono said there were several people injured but no one died on the domestic flight carrying 50 people.

On May 16, another Myanmar Airways MA-60 shot past the end of the runway at Monghsat in northern Shan state when its brakes reportedly failed. A wing and a wheel were damaged, and two passengers suffered broken arms.

In December, a Fokker aircraft belonging to privately-owned Air Bagan crash-landed in a rice field in Myanmar’s Shan State, killing two and injuring 11.