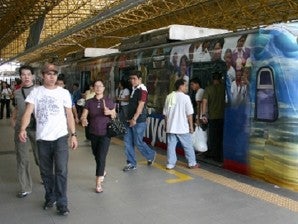 MANILA, Philippines—The Light Rail Transit Authority implemented early Monday crowd control measures in some of its stations in anticipation for the opening of classes in Metro Manila, its spokesman said.

Under the crowd control rule, Cabrera said the management limits the number of passengers to be allowed inside particular stations.

Cabrera explained that if they would not implement this, trains would be full already by the time it passes Roosevelt and passengers in succeeding stations would not be able to fit in.

The crowd control rule, he said, has been implemented in a daily basis since last week in anticipation of the resumption of classes. It starts at around 7 a.m. until around 9 a.m.

The ruling is “not yet perfect,” but adjustments are being taken, Cabrera said.