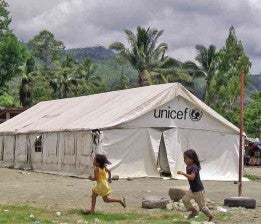 TEMPORARY SCHOOL Children play outside a Unicef tent to be used as a temporary classroom for pupils in Barangay Andap, which was hit hardest by Typhoon “Pablo” when it swept through New Bataan town in Compostela Valley six months ago. FRINSTON LIM/INQUIRER MINDANAO

The duplex-style edifices to be used as temporary classrooms at the Andap National High School grounds are being built by residents trying to get back on their feet six months after a massive flooding spawned by Typhoon “Pablo” obliterated their school and a large part of the community.

“As best as we could, we’re trying to build everything for the schoolchildren,” said Joyce Senoron, the officer-in-charge of Andap Elementary School.

She and other female teachers of the 14-person faculty cook and prepare meals for the builders, who get several kilos of rice as “daily wages.”

But the teachers are worried not all of the temporary classrooms will be finished by Monday because of the lack of materials, like nails and wood.

“We scrounge for materials like this, just for the volunteer to continue the construction,” Senoron told the Inquirer on Saturday, pointing to a long bamboo stick used as walling support of one of the unfinished classrooms.

Marcelino de los Reyes, the Department of Education’s district chief, said P7 million had been set aside for the 12 classrooms at Andap, but a site for the new school had yet to be finalized.

The present temporary school is on the grounds of Andap National High School. Many evacuees have also built their new homes within the campus. The area is about a kilometer away from the “ground zero” of Pablo’s devastation.

De los Reyes said a one-hectare area near Andap High School was being considered to be the site for the new elementary school campus, but negotiations with the property owner had been slow.

The Unicef tent could accommodate at least 80 students, or the size of two nine- by seven-meter classrooms, while the makeshift buildings are designed for 40 students each, school officials said. At least three classrooms had been built by Saturday.

“We used to have 15 classrooms and 480 pupils before Pablo struck,” said Senoron, adding the school was expecting at least 400 enrollees. “Many of them usually enroll days into the start of classes,” she said.

New Bataan school district had 8,090 pupils in 23 elementary schools a month before Pablo struck, but latest records show a decline of almost 300.

At least 94 schoolchildren were killed in New Bataan during the Dec. 4 flooding, including 49 at Andap.

“Many families relocated to other places, further causing our enrollment to decline,” he said.

De los Reyes said tents like those given by Unicef and the DepEd were to be used in Taytayan Elementary School, also in Andap. Village councilor Osias Villasan said local officials there would request materials to rebuild their school.

“We’re praying these temporary classrooms are indeed just temporary. The children’s learning could be hampered if these makeshift structures would be in for the long haul,” said Senoron.

“The structures do not have proper walls and with the noise all around, there may not be a good learning environment,” said a teacher. “We have to make our voice loud to the point of almost shouting just for the students to hear. And with several classes doing that at the same time, just imagine how hard it is for everyone.”

Delos Reyes said the community had begun to recover from the typhoon battering.

“Although there are some who are still traumatized, the general sentiment is that people are already moving on with their lives. Children are eager to return to school,” he said.

In Zamboanga City, Education Secretary Jamar Kulayan of the Autonomous Region in Muslim Mindanao said Sunday he expected 625,166 elementary pupils to troop to 2,198 schools in the region on Monday.—With a report from Julie Alipala, Inquirer Mindanao