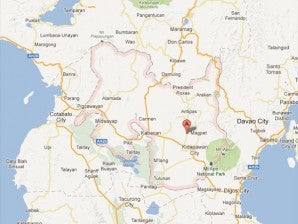 MANILA, Philippines—Strong earthquakes shook the southern Philippines and Taiwan over the weekend, killing one person and injuring 27 others.

On Saturday, a 5.7-magnitude quake with its epicenter in Carmen town in North Cotabato jolted the southern island of Mindanao at about 10:10 p.m. So far, officials counted nine persons injured and noted damage to school buildings, a bridge, water pipes and at least 30 houses.

On Sunday, a stronger 6.3-magnitude quake shook central Taiwan in the early afternoon, causing rockslides that killed a motorist on a mountain road and injured at least 18 others in various parts of the island.

Hours earlier, a 5.5-magnitude quake rattled the Pacific seabed off the Solomon Islands but there were no reports of damage.

No tsunami alerts were issued due to the quakes.

According to the Philippine Institute of Volcanology and Seismology (Phivolcs), 80 aftershocks had so far been recorded, five of them strong enough to be felt.

Volcanologist Angelito Lanuza said the tremor was caused by shifting tectonic plates in one of the unnamed faults in the area.

Cynthia Ortega, North Cotabato provincial action officer, in a radio interview said five persons were hurt when they were hit by falling debris in their homes in Barangay Kimadzil, while three children were also hurt during a minor landslide in Barangay Kibudtungan, also in Carmen.

North Cotabato Gov. Lala Taliño-Mendoza, in a phone interview, said  at least four classrooms were damaged by the earthquake, prompting the local government to suspend Monday’s opening of classes in the area.

“The ceiling of the classrooms gave in,” Mendoza said.

The quake also damaged the approach to the Kidmazil bridge that links North Cotabato and Bukidnon and water pipes in two villages.

Mendoza said at least 30 semiconcrete houses were reported damaged by the quake.

The governor said five persons, including four kids, were brought to the hospital for minor injuries. They were released after receiving medical treatment.

Crisanto Abendan, a resident of Malapag in Carmen, told the Inquirer by phone that they were watching TV when the quake struck and all their things on tables and in cabinets shook.

“We felt slight dizziness, then me and my son stood up and ran outside the house,” Abendan said.

Mendoza said the highway was passable only to light vehicles yesterday while engineering teams cleared the roads. “It’s a big relief that no motorist was passing through the highway when boulders rolled down from the mountain,” Mendoza said.

In Taiwan, the motorist who was killed was reportedly driving a car in the vicinity of Mount Ali in the southern part of the island, the Taiwan Fire Agency said.

In the city of Taichung in central Taiwan, the quake caused panicked shoppers to scream and rush out of a shaking 12-story department store that shook violently for nearly a minute, media reports said.

The tremor was felt all over the island, but most severely in the central and southern regions. Its epicenter was traced to Nantou County in central Taiwan, about 250 kilometers south of Taipei, Taiwan’s Central Weather Bureau said.—Edwin O. Fernandez and Karlos Manlupig, Inquirer Mindanao; AP

Read Next
Makeshift classrooms in typhoon-hit village
EDITORS' PICK
Legarda emphasizes role of ICC/IPs in nation building this IP month
NCR’s COVID-9 alert level may be downgraded from 3 to 2 soon — DOH
Climate Change Commission and Nestlé PH to discover sustainability-focused solutions
Gordon calls 2 Pharmally execs ‘Senate fugitives’ after no-show in probe
Isko Moreno bares ‘two-pronged’ approach to rehabilitate MSMEs
What’s at stake for every fighter at ONE: NextGen
MOST READ
LJ Reyes says Paolo Contis made ‘no efforts’ to talk to her after their split
Gordon to Duterte: You? Teaching me courtesy?
Yang’s Princeton degree raises eyebrows among senators
PDP-Laban Cusi wing Senate bets willing to give way to Duterte
Don't miss out on the latest news and information.