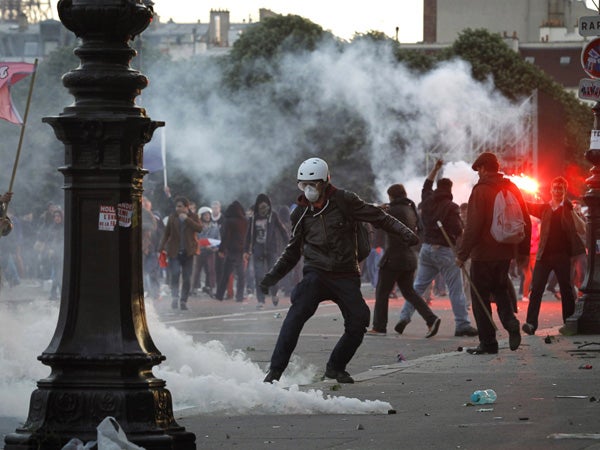 Anti-gay marriage demonstrators face riot police, not seen, while teargas canisters smoke during clashes in Paris, France, Sunday May 26, 2013. Tens of thousands of people protested against France’s new gay marriage law in central Paris on Sunday. The law came into force over a week ago, but organizers decided to go ahead with the long-planned demonstration to show their continued opposition as well as their frustration with President Francois Hollande, who had made legalizing gay marriage one of his keynote campaign pledges in last year’s election. AP Photo/Laurent Cipriani

PARIS – At least 150,000 demonstrators took to the streets of Paris to protest a new law allowing gay marriage, a largely peaceful gathering that later turned violent as riot police battled hundreds of right-wingers.

Police said they had made a total of 293 arrests and that six people were injured in the course of Sunday’s demonstration: four police officers, an AFP photographer and a protester.

Interior Minister Manuel Valls, in a statement, blamed the “extreme right” for the violence.

“These incidents were provoked by several hundred individuals, most from the extreme right and the (nationalist) Identity Bloc, who violently attacked police,” he added.

The rally came as the jury at the Cannes film festival in southern France on Sunday awarded its Palme d’Or top prize to the sexually graphic lesbian love story “Blue is the Warmest Colour” by French-Tunisian director Abdellatif Kechiche.

The main demonstration on Sunday saw three separate processions converging on the Invalides esplanade, filling the huge promenade with pink and blue — the colours adopted by the anti-gay marriage movement.

Police said 150,000 people turned out to protest, a figure immediately contested by organisers who said one million opponents of the law had shown up.

Some of the far-right activists briefly unfurled a banner at the ruling Socialist party’s headquarters urging President Francois Hollande to resign.

As the protestors dispersed, after a largely peaceful march, police said up to 500 people began attacking them by throwing metal barriers, smoke flares and beer bottles.

The youths shouted slogans against the government such as “Socialist dictatorship” and also threw objects at journalists covering the event.

Fears of unrest at Sunday’s protest had been fuelled by violence that erupted earlier this month during celebrations marking football club Paris Saint-Germain’s league victory, which saw tourists attacked and shop and car windows smashed.

Some 4,500 security forces were mobilised for Sunday’s demonstration that was billed as a last-ditch show of force by opponents of the bill allowing same-sex marriage and adoption, which was voted into law on May 18 following months of bitter protests.

But those in the protest ignored the recent tensions, bringing their children along as others had in previous demonstrations.

“We keep hearing about a far-right movement, I can see only families here,” said one man called Raoul, who came from the city of Dijon.

Onlookers were instead treated to creative forms of protest. One man dressed in black held a scythe and wore a mask of Hollande as he stood behind a coffin containing a mannequin dressed as Marianne, the emblem of France.

“Hollande, your mother isn’t called Robert”, shouted some of the demonstrators in a slogan that gained in popularity as the afternoon progressed.

Supporters and opponents of the bill began protesting last autumn when it was adopted by the cabinet, and continued to do so at regular intervals throughout the country during the legislative process.

The definitive vote in the French parliament came on April 23 when the law was passed legalizing both homosexual marriages and adoptions by gay couples.

One of Hollande’s campaign pledges, it has proved hugely divisive in a country that is officially secular but predominantly Catholic.

France is the 14th country to legalise same-sex marriage, an issue that has also divided opinion in many other nations.

And in Poland, some 10,000 protesters marched Sunday in solidarity with opponents of the French law, to defend the traditional family structure.

But according to a survey published Sunday in the Journal du Dimanche, nearly three-quarters of French people are tired of the anti-bill protests and think they should stop.

Another potential flashpoint will be in the southern town of Montpellier on Wednesday when the country’s first gay wedding is due to take place.