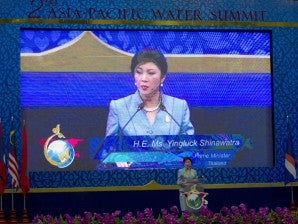 From Central to Southeast Asia, regional efforts to secure water have sparked tensions between neighbors reliant on rivers to sustain booming populations.

Breakneck urbanization, climate change and surging demand from agriculture have heaped pressure on scarce water supplies, while the majority of people in Asia-Pacific still lack access to safe water despite strong economic growth.

“There could be a fight over resources,” Thailand’s Prime Minister Yingluck Shinawatra cautioned in an address to a regional water security forum in the northern Thai city of Chiang Mai.

“No country in this region can handle these challenges alone,” she said, hailing forums such as the Asia-Pacific Water Summit as the route to satisfying countries’ thirst peacefully.

A Thai firm is behind a controversial dam over the Mekong river in Laos, a project decried by downstream countries Vietnam and Cambodia, which fear it could ruin their farming and fishing industries.

Delegates on Monday adopted a sweeping “Chiang Mai declaration” pledging to build regional resilience to natural disasters, share technical skill on management of the resource and push water security to the top of the agenda.

Asian nations need to plow an estimated $380 billion into water and sanitation systems in the decade to 2020 if they are to achieve water security, Brunei Sultan Hassanal Bolkiah warned the forum.

The “vital undertaking” comes against a backdrop of competition that “could lead to international disputes,” he cautioned.

One such row is between Uzbekistan and its neighbors Tajikistan and Kyrgyzstan, which want to build two of the world’s biggest hydro-electric power stations.

Speaking at the conference on Sunday, Tajik President Emomali Rakhmon defended his country’s right to exploit its natural resources but pledged to pursue a “peaceful solution” to the dispute which has seen angry rhetoric soar over recent months.

Bangladeshi Prime Minister Sheikh Hasina cited a water-sharing treaty between her nation and India over the Ganges river as an example of successful water diplomacy.

“Only judicious management of access to water resources” will prevent conflict, she said, adding that low-lying Bangladesh has around 30 million people exposed to rising sea levels.

The Asian Development Bank last month warned that nearly two-thirds of people in Asia-Pacific have no clean, piped water at home despite the region’s strong growth, blaming poor management and a lack of investment in infrastructure.

Climate change and environmental damage are also posing unpredictable threats to the region’s water supply, with glaciers that feed rivers in retreat and once-pristine waterways polluted with waste.

“Things are happening that have never happened before” because of climate change, he warned. “There’s no place for conflict there.”—Aidan Jones