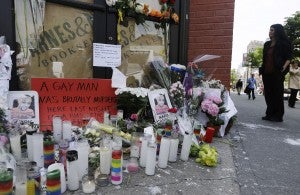 NEW YORK—New Yorkers—including mayoral candidate Christine Quinn—planned a rally Monday to protest the shooting death of a gay man in the neighborhood that was the cradle of the modern US gay rights movement.

Mark Carson, 32, was killed with a bullet to the head Friday night in Greenwich Village, allegedly by a 33-year-old man who shouted homophobic slurs at him and also threatened to kill the friend walking with him.

“You want to die tonight?” was among the cries from suspect, Elliot Morales, according to witnesses.

“It is clear that the victim here was killed only because, and just because, he was thought to be gay,” New York City police chief Ray Kelly said Sunday, emphasizing the victim did nothing to provoke the attacker.

The murder has sparked a strong response from New York’s gay community, not least because it happened in a neighborhood known for its tolerance and where the so-called “Stonewall riots” in 1969 sparked the modern gay rights movement.

The call for a march “to demand an end to hate crimes against our community … and to mourn the death of Mark Carson” came from The Center, a group that defends gays, bisexuals and transsexuals.

More than 25 gay rights groups, including GLAAD, the New York Anti-Violence Project and the Human Rights Campaign have pledged to join the rally, as have a number of local officials, including mayoral candidate Quinn, who also heads the city council.

Quinn, 46, is gay and invited many New York celebrities to her wedding a year ago.

Demonstrators will march to the site of the shooting, on the corner of 6th Avenue and 8th Street, where flowers and candles continued to be left Monday.

The murder comes as several US states passed laws in recent weeks to legalize same-sex marriage, bringing the total to 12 states and Washington, that now allow the practice. New York approved same-sex marriage in 2011.

Some have expressed concern over an increase in homophobic incidents in New York, with 22 counted so far in 2013, up from 13 during the same period last year.

Morales, the suspect in the killing, was arrested shortly after the incident and charged Sunday.