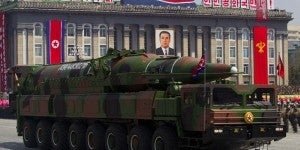 In this April 15, 2012, file photo, a North Korean vehicle carrying a missile passes by during a mass military parade in Pyongyang’s Kim Il Sung Square to celebrate the centenary of the birth of the late North Korean founder Kim Il Sung. AP FILE PHOTO

“Our military is closely monitoring activities by the North’s military since there is a possibility of additional launches in the future,” Defence Ministry spokesman Kim Min-Seok told reporters.

The North fired three short-range guided missiles off its east coast on Saturday and another on Sunday, apparently as part of a military drill.

Such drills are not unusual but they come at a time of simmering military tensions on the Korean peninsula.

Following the North’s nuclear test in February and subsequent UN sanctions, tensions escalated sharply with Pyongyang issuing near daily threats of retribution against the South and the United States.

Although the situation has calmed somewhat in recent weeks, Pyongyang has continued to denounce a series of South Korea-US joint military exercises which it sees as dress rehearsals for invasion.

The defence ministry spokesman declined to identify the missiles fired at the weekend, but media reports said they might be KN-02 surface-to-surface weapons with a range of up to 160 kilometres (100 miles).

“It is time for them to resume dialogue and lower the tensions,” Ban said in Moscow.

At one point, North Korea had been primed to test a pair of medium-range missiles, but US intelligence said the weapons were removed from their launch pads in early May.