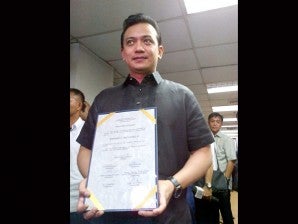 Reelected Senator Antonito Trillanes IV shows his certificate of proclamation which he was only able to formally receive Monday, May 19, 2013, instead of Friday last week because he was out of town. MATIKAS SANTOS/INQUIRER.net

MANILA, Philippines — Reelected Senator Antonio Trillanes IV formally received his certificate of proclamation Monday before the Commission on Elections (Comelec) en banc, sitting as the National Board of Canvassers (NBOC).

Trillanes was previously unable to receive his certificate during the proclamation last Friday because he was out of town.

“I was unable to take a flight back in time for the proclamation,” Trillanes told reporters in an ambush interview.