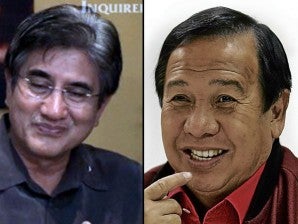 MANILA, Philippines—Gringo Honasan maintained a lead by nearly 390,000 votes over Dick Gordon in the battle for 12th place in the senatorial race, as Grace Poe remained at the top spot, according to the partial and unofficial tally by an election watchdog on Tuesday morning.

Based on the vote count update at 7:41 a.m. of the Parish Pastoral Council for Responsible Voting’s (PPCRV), Poe of Team PNOy has 14,359,057 votes while others names on the top 12 remains unchanged.

The PPCRV Command Center on United Nations Avenue in Manila said 66.47 percent or 51,958 of 78,166 clustered precincts have been counted.