MANILA, Philippines  — Philippine officials say despite scattered killings and fears of fraud, congressional and local elections on Monday are expected to be relatively peaceful after authorities took drastic steps to prevent any chaos. 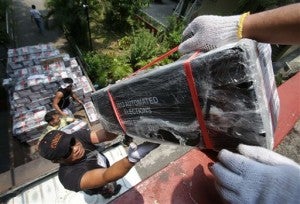 Election workers transfer official ballots on a truck at a distribution center in Manila, Philippines on Sunday May 12, 2013. AP

Philippine military spokesman Brig. Gen. Domingo Tutaan says the 120,000-strong armed forces and the police are on full alert and are ready to deal with any emergencies. Army troops dropped leaflets from helicopters calling for peaceful elections in Masbate province, one of several potential hotspots with a history of poll violence.