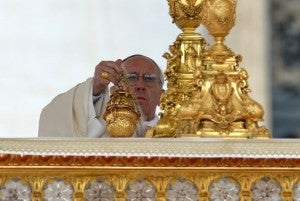 VATICAN CITY — Pope Francis on Sunday created the first saints of his reign, canonizing some 800 Italian martyrs who refused to convert to Islam in the 15th century, as well as a Colombian and a Mexican who founded congregations.

Thousands of faithful gathered in St. Peter’s Square to attend the service to formally bestow the sainthoods, which had been approved by Francis’s predecessor, Benedict XVI.

The new saints include Italian cobbler Antonio Primaldo, who was killed along with an estimated 800 other Italians in 1480 by Ottoman forces for refusing to convert to Islam.

The two women founded religious orders and devoted their lives to helping the poor, the sick and native peoples.

Scores of Colombians and Mexicans travelled to the Vatican to attend the canonizations by Pope Francis, who became the first Latin American pope in history when he was elected in March.