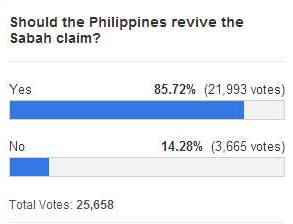 MANILA, Philippines – The Philippines’ claim on Sabah should be revived, most respondents of the recently concluded unofficial INQUIRER.net poll said.

In February, armed Filipinos led by the brother of Sultan Jamalul Kiram III, sailed to Lahad Datu in a bid to assert the country’s claim over the disputed territory.

The attempt of Kiram’s “Royal Army”, however, resulted in deaths and arrests of several members of the Filipino gunmen.