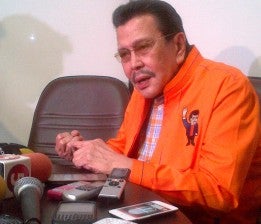 MANILA, Philippines—Former President and Manila mayoral candidate Joseph Estrada assured Manileños on Sunday of full transparency in the utilization of their taxes to finance urban renewal and make Manila a center of trade and commerce once more.

“The Erap-Isko Moreno administration will be marked by full fiscal transparency so the people would be able to sleep soundly at night knowing that their taxes are working for them up to the very last centavo,” said Estrada in a report on  Radyo INQUIRER 990AM early Sunday.

“We will fund badly needed infrastructure projects not only to transform Manila into a livable city, but also to create more jobs that will stop mendicancy and put food on the table of Manileños,” Estrada added.

Estrada said he and Moreno, his vice mayoral running-mate, would computerize Manila’s tax collection system and fund utilization for easy tracking by the people.

If elected mayor, Estrada said he would lead the people of Manila in fighting poverty, criminality and the economic stupor brought about by the years of neglect, apathy and corruption of the past dispensation.

“At present, Manila is buried neck-deep in debt to the tune of P3.5 billion according to the Commission on Audit. Now, is it any wonder that its outgoing mayor Alfredo Lim even vetoed P240 millions of fund already approved by the city council intended to buy hospital equipment?” said Estrada.

“Why boast of having a city hospital when it doesn’t even have the necessary medical equipment and medicines?”

Estrada lamented that under the outgoing administration, Manila had posted the highest poverty incidence in the whole of Metro Manila and the highest underemployment and unemployment in the entire Philippines.

“No less than a report of the Department of the Interior and Local Government ranked Manila a miserable 36th out of the 38 highly urbanized cities in the country,” said Estrada.

Estrada said that as he fought what he termed as “hoodlum in robes” in the judiciary as President, he would also fight the “hoodlums in police uniforms” to ensure that the Manila police force is weeded out of the ‘undesirables’ and make it more effective in fighting crime.

He said maintaining peace and order is critical if foreign tourists are to feel safe in Manila, where at present they are ganged upon by hold-up men the moment they step out of their hotels.

“Same with local and foreign investors. They would come back if the red tape, corruption and criminality that have marked the outgoing dispensation are licked by the Erap-Moreno administration,” said Estrada.