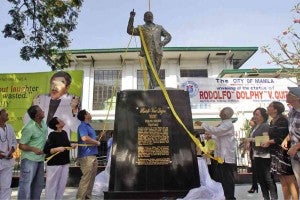 MANILA Mayor Alfredo Lim (right of statue) leads the unveiling of the Dolphy monument along with the family and friends of the late comedian in front of Museo Pambata on Roxas Boulevard on Tuesday. NIÑO JESUS ORBETA

“Laughter is a sign that one takes life seriously.”

The chair of the movie review body quoted the late Jesuit priest, Benito Arguelles, to sum up the impact Dolphy had in people’s lives.

“The greatness of Rodolfo Vera Quizon (Dolphy’s real name) lies in the fact that in making all of us laugh, he took each and every one of us seriously. To Dolphy, we were all special in every joke that he delivered, with each song that he sung, with each dance number her performed,” Movie and Television Review Classification Board Chair Eugenio Villareal said, as a   monument for the comedy king was unveiled yesterday in front of Museo Pambata in Manila.

Laura Quizon, Dolphy’s sister, sad the mayor and the late comedian grew up in Tondo. Lim was also one of the pallbearers who carried Dolphy’s casket at his funeral.

The 300-kg, 7-ft bronze statue was made by Jonas Roces, who also made the statue of action king Fernando Poe Jr. recently unveiled in front of the US Embassy in Manila and the 22-ft statue of Jose Rizal, the tallest in the world, in front of city hall in  Calamba and Laguna provinces.

Apart from the two Filipino movie industry giants, there are statues, too, of  former presidents  Corazon Aquino and Manuel Roxas.

Laura said that as a young boy, Dolphy sold peanuts and watermelon seeds in movie theaters. He also shined shoes, worked as a stevedore and as a calesa driver to support the family.

Dolphy Jr. expressed his thanks on behalf of the Quizon family. 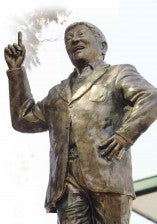 Dolphy was an impressive tap dancer along with Bayani Casimiro Jr. at the Avenue, Lyric and Orient theaters.

His  first movie was “Dugo ng Bayan” with Fernando Poe Sr. Sampaguita Pictures launched him as a comedian in tandem with Panchito.

Lim said not everyone can make you laugh, and the joy given by Dolphy was priceless.

But an important aspect of Dolphy’s character was his generosity.

“He didn’t think ill of anyone. Instead, he wanted to know  how he could be of  help,” the mayor said.

Gemma Cruz-Araneta, deputy chair of the Manila Historical and Heritage Commission, said it was only right to place Dolphy’s statue in front of Museo Pambata, a beneficiary of the late comedian’s RVQ Foundation.

Dolphy was given the Outstanding Manilan award in 2010 and the Diwa ng Lahi award in 2012 by the city government of Manila.

He also received the Order of the Golden Heart in 2010 from President Aquino.