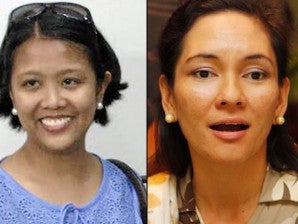 MANILA, Philippines – Let’s win the Senate race first, then debate in the plenary.

Senatorial candidate Nancy Binay of the United Nationalist Alliance on Sunday demurred from a challenge from Risa Hontiveros from the rival Team PNoy that the two of them engage in a one-on-one debate.

Binay said they could engage in debate on the Senate floor, should both of them be victorious in their campaigns.

Hontiveros made the dare for a debate on Sunday in apparent response to posts or memes on social networking websites comparing her track record with that of Binay.

Hontiveros, a former partylist lawmaker, has been lagging behind in the surveys and has been landing outside the winning circle. She is on her second attempt to enter the Senate.

Binay, who has held no elective post and has worked mostly as the personal assistant of her parents Vice President Jejomar Binay and former Makati Mayor Elenita Binay, has frequently been included in the top 10 in surveys.

The Internet posts questioned the survey results, asking the Philippines why this was the case.

According to Binay, there was no more time for her and Hontiveros to engage in debate with a little over the month to go before the elections.

She said the two of them should just devote their time to trying to win the polls, and then they could debate when they both reach the Senate.

“As of the moment, it seems there is no time for the two of us to debate. Maybe if the two of us would be fortunate to win and join the Senate, we can debate there. I think that’s the best forum for us to have the debate, on the Senate floor,” she told reporters in Navotas, where UNA candidates courted voters.

Binay said she would rather spend the remaining weeks of the campaign going directly to the people and convincing them to include her in their ballots.

“Among the candidates, I am the latecomer, I am the one who has not yet visited the entire country, so my priority now is to go around and have face to face contact with the voters,” she said.

She also said this is how she would counter Internet memes that disparaged her supposed lack of qualification to join the Senate. Such criticisms are par for the course when running, she said, but added that she is human and gets hurt once in a while.

According to the Vice President’s eldest daughter, her family’s years of experience in public service have given her an advantage because she knows the sentiment of the people on the ground.

If all the Binays running in the midterm elections all win, there would be four members of their immediate family in public office.

Nancy Binay’s sister Abigail is running for re-election as Makati representative, while brother Jejomar Erwin Jr. is seeking to retain his post as Makati mayor. Vice President Binay’s term would end in 2016.