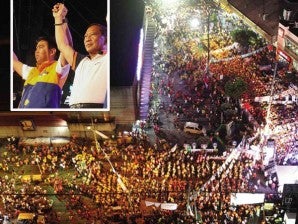 He practically has “no opponent,” the people around him always say.

But Makati Mayor Jejomar Erwin “Junjun” Binay Jr. said he and his team are still “running scared” and doing all that is necessary to win the people’s votes.

Others may be underestimating his lone challenger Renato Bondal, a lawyer and former chair of Barangay Palanan, but the reelectionist Binay maintained that he could not afford to be complacent—even with his family dominating Makati politics for the last 27 years.

Junjun’s father, Vice President Jejomar Binay, was appointed officer in charge of Makati shortly after the 1986 Edsa People Power Revolution and was later elected mayor. He held the position till 1998 and was succeeded by his wife Elenita, who served a three-year term.

In 2001, Jejomar was again elected mayor for three terms, before Junjun took over in 2010.

“It has always been our style to play catchup (maghabol) even if we are already sure of our win,” said the 36-year-old mayor, speaking to reporters before going up the stage to face thousands of supporters at his proclamation rally Wednesday night.

“Team Binay” held court at the intersection of P. Ocampo Street and Chino Roces Avenue, gathering crowds who came in black and yellow for the 6 p.m. program that lasted until midnight.

The mayor shared the stage with his father and his allies who are running for the Senate under the United Nationalist Alliance (UNA), including another Binay, Junjun’s elder sister Nancy.  Also present was a fourth member of the family, Makati’s 2nd District Rep. Abby Binay, also a reelectionist.

Observers say the more exciting battle is not the Binay-Bondal fight but the contest for the city’s No. 2. Binay’s running mate, former city administrator Marjorie de Veyra, is up against incumbent Vice Mayor Kid Peña who is seen to enjoy more clout in the grassroots since he used to head the Association of Barangay Chairmen in Makati.

In his speech, the mayor described De Veyra as a longtime ally of the Binays, while taking a swipe at Peña for his supposed absenteeism in the city council.

Binay also said he will continue the projects his father started to make Makati a premier city hosting the country’s main business district.

“But what’s different (under my leadership) is the use of technology to be able to serve the people efficiently,” he said, citing as an example a project that will provide free, city-wide WiFi service starting with one barangay this year.

On criticisms that the Binays have come all-out as a well-entrenched political dynasty, the mayor maintained that he and his family members assumed those positions not because they were “given” to them by their father but because “we were duly elected by the people.”

“And we’ve also seen how you helped my father in his bid for the vice presidency,” Binay told the crowd.