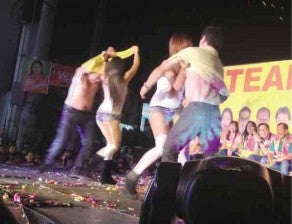 In an interview, Oreta said he might change his lineup by replacing Edwin Dimagiba of the Nationalist People’s Coalition with the incumbent vice mayor, Diosdado Cunanan, who is seeking reelection under the Liberal Party ticket.

According to Oreta, the rally, which featured a female dance trio conducting “games” that had men ending up half-naked onstage and making suggestive body contacts, was organized by the staff of Dimagiba’s cousin, Rep. Josephine Lacson-Noel.

An INQUIRER report on Thursday carried a photo of one of the games played by the group known as The Playgirls.

Oreta said he was not consulted regarding the program but later admitted negligence on his part because he did not check the kind of performances lined up that night.

But since he and Lacson-Noel are running unopposed, Oreta said, the “head of the whole campaign” is Dimagiba, who faces three opponents.

“Yet it appears that he (Dimagiba) is not being assertive as he should be. He’s the one running the show,” he said. “He should know everything.”