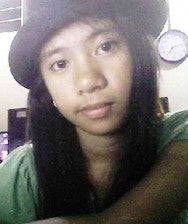 GENEVEIVE Alar Pag-ong, 15, of Teresa, Rizal province has been reported missing since Good Friday, March 29. A third-year high school student of Teresa National High School, Pag-ong was last seen leaving her house with her boyfriend, Gilbert Ignacio of Binangonan, Rizal, to join a religious procession. She was wearing a blue blouse with the words “Never Give Up” at the time. She never came back from the procession and has not replied to calls and text messages to her cell phone. Members of the missing girl’s family have reported her disappearance to the Teresa police station. Those who have information on her whereabouts can get in touch with her mother Jocelyn Alar Pag-ong at 0918-4771917, 0935-8781309, 0915-9446833 or 0919-5750177.

THE OFFICIALS and editors of a tabloid were charged with libel on Tuesday for their publication of a story about tweets made last year by actress Ruffa Gutierrez which allegedly exposed another actress, Amalia Fuentes, to “public hatred, discredit, contempt and ridicule.” Ironically, Gutierrez was excluded from the suit because at the time she posted the supposedly libelous tweets on Twitter, there was still no law covering malicious statements made online. Charged in the Quezon City Regional Trial Court were Abante Tonite writer Allan Diones; its president Allen Macasaet; managing editor Nicolas Quijano Jr.; editorial board members Janet Bay, Jesus Galang, Jeany Lacorte and Randy Hagos; advertising officer Ron Tamayo; production officer Jeorge Punzalan and circulation officer Lino Minor. The case stemmed from Fuentes’ complaint about an article which appeared in the tabloid in April last year in which Diones wrote about Gutierrez’s tweets about “an old, fat, smelly woman who wouldn’t stop inventing false stories” about her and her family. Although Gutierrez did not say who she was referring to, Diones said it was obvious she was making a dig at Fuentes who had a feud with her mother, Annabelle Rama. Jeannette I. Andrade

SIX MEN who broke into a woman’s house in Antipolo City made off with two metal vaults and her sport utility vehicle. According to PO3 Joel Villarmino, the burglary was reported at 11:15 a.m. yesterday by the victim, Lea Ballatan, who said someone broke into her house at Town and Country Subdivision.  Villarmino said they had yet to determine what the vaults’ contents were. Ballatan told the police that the thieves also took her vehicle, a Land Cruiser, with plate number TQD 715. At press time, a scene of crime operations team was still examining the victim’s house for clues. Kristine Felisse Mangunay

ROUND-THE-CLOCK fun and entertainment is just a ride away as the country’s one-stop, nonstop integrated leisure and lifestyle hub, Resorts World Manila (RWM) offers special free shuttle services for members and guests to-and-from 20 pickup points within Metro Manila. For valued members, scheduled trips from selected locations in the cities of Mandaluyong, Taguig, Las Piñas, Makati, Parañaque, San Juan and Quezon City, Alabang in Muntinlupa City and Manila’s Binondo and Ermita, are available every day upon presentation of RWM membership cards. Six 25-seater airport shuttle bus transfers, from the Naia terminals to RWM, are also available exclusively for RWM card-bearing members, with one-hour departure intervals. And for less than P1,000, guests from the provinces can enjoy a round-trip ride to RWM, plus a free dining voucher and GameZoo amusement complex credits. The RWM provincial bus program is available in selected provinces, including Batangas, Cavite, Rizal, Quezon, Bulacan, and Pampanga. For more information, log on to rwmanila.com or call the tourists/visitors hotline at 9088833.