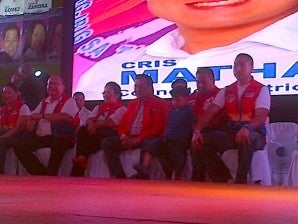 MANILA, Philippines – Former President Joseph Estrada arrived in San Juan to personally endorse the mother of his son, Jose Victor “JV” Ejercito, as she seeks re-election as mayor under the United Nationalist Alliance.

Estrada, one of UNA’s so called “Three Kings”, arrived 7 p.m. on Tuesday at the Tanghalan ng Masa in San Juan City where the opposition coalition was holding its proclamation rally for incumbent Mayor Guia Gomez.

Organizers estimate the crowd to be around 8,000.

In between speeches of the local candidates, the crowd was being entertained by celebrities that included the Sex Bomb dancers.

In an interview, Gomez said her centerpiece project was housing. Once re-elected, Gomez said her first project would be the establishment of medium-rise buildings for fire victims in Barangay (village) St. Joseph.

Gomez also claimed that San Juan was one of the top performing cities in the country during her term.