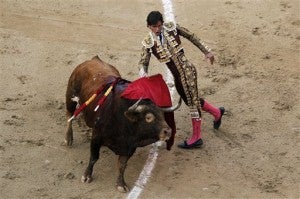 MADRID  — The government of the Spanish city of San Sebastian has taken a first step in its long-announced bid to ban bullfighting in the popular seaside resort.

Ruling Basque nationalist party Bildu published new conditions for the hire of the publicly owned bullring, forbidding its use for animal cruelty through 2016.

The specifications approved by the city council Wednesday stipulate that companies bidding to run the bullring must promote a wide range of music, sports, artistic and cultural events, but they “expressly prohibit activities that involve any form of cruelty to animals.”

Mayor Juan Karlos Izagirre was elected to office in June 2011 and has since then maintained that bullfights at the covered Illunbe ring lose money.

The venue is often used for basketball games.