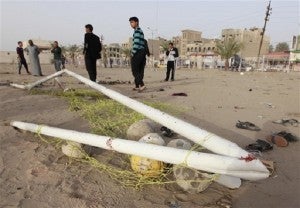 People inspect the aftermath of a bomb attack at a soccer field in Shula, northwestern Baghdad early this month. A series of bombings struck Baghdad and towns south of the Iraqi capital on Thursday, killing at least 22 and wounding dozens in areas that are home to mostly Muslim Shiites — the latest evidence of rising sectarian discord in Iraq. AP/Hadi Mizban

BAGHDAD—A string of bombings targeting Shiite mosques in Iraq killed at least 23 people and wounded dozens on Friday, officials said. The attacks were the latest in spectacular assaults staged by insurgents seeking to undermine the Shiite-led government’s efforts to achieve security across the country.

There was no immediate claim of responsibility, but the bombings bore the hallmarks of al-Qaida’s Iraq branch. The group, known as the Islamic State of Iraq, frequently uses car bombs, suicide bombers and coordinated blasts in an effort to sow fear among Shiites and erode their trust in the government of Prime Minister Nouri al-Maliki.

First, a parked car exploded in Baghdad’s western Jihad neighborhood, killing seven worshippers and wounding 25, a police officer said. Another police officer said four people were killed and nearly 20 were wounded in a bombing in eastern Qahira neighborhood. Three people died and 15 were wounded in the eastern Zafaraniyah district while yet another car bomb killed five people and wounded 14 in the northeastern Binook neighborhood.

Three health officials confirmed the causality figures. All officials in Baghdad spoke on condition of anonymity because they were not allowed to talk to the media.

And in the northern city of Kirkuk, 290 kilometers (180 miles) north of Baghdad, a suicide bomber drove his explosive-laden car into a group of worshippers as they were leaving a mosque after Friday prayers, killing three people and wounding up to 70, according to police Col. Najat Hassan. A senior provisional health official, Sidiq Omar Rasool, confirmed the casualty figures in Kirkuk.

Violence has ebbed sharply since the peak of Sunni-Shiite fighting that pushed the country to the brink of civil war in 2006 and 2007, but Sunni insurgents still occasionally carry out high-profile attacks against Shiites, considering them to be heretics.

Friday is a particularly popular day for militants to undertake such attacks because of the rush of mostly men and boys who flock to the mosques throughout the country to hear traditional Muslim sermons and take part in communal prayers.