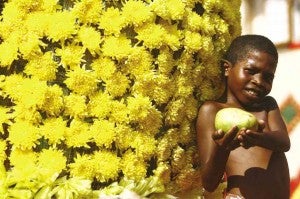 AN AETA takes part in the recent Mango Festival held in Zambales in celebration of its best produce, the mango. JOAN BONDOC

CITY OF SAN FERNANDO—Zambales mango remained to be the sweetest, according to the Department of Agriculture (DA), although production of the fruit slid down.

Officials of the province, however, expressed optimism that mango production in Zambales would be revived.

He said the meeting “offered us the best opportunities to meet and conduct business with professionals from across the mango trade.”

DA officials also remained hopeful about the prospects of the mango industry.

“It has been long known that mangoes, especially in Zambales, are sought after because of their sweetness,” said Lorenzo.

The Zambales mango has been confirmed by Guinness Book of World Records as the world’s sweetest.

Mangoes grown in Masinloc, Zambales, were found with a total soluble sugar of 23 percent, Lorenzo said in a report released here after the recent 15th National Mango Congress hosted by the Zambales government.

Powerhouse Kings, Beermen seek to bounce back from shock losses