Churches to visit in QC, Manila

VISIT THESE CHURCHES. Here’s a slide show showing photos of the various Catholic churches in the country which can serve as guide in planning your Visita Iglesia itinerary. Photos from Philippine Daily Inquirer, Cebu Daily News, and contributors. 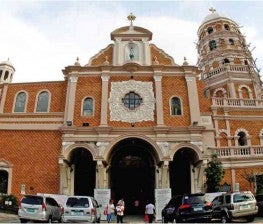 Here is a list of churches in Quezon City and Manila to guide you in planning your Visita Iglesia itinerary.

Built in 1972, the Immaculate Heart of Mary Parish Church is the only church in Luzon that is run by the Claretian Fathers.

The church features an imposing 2.1-meter wooden sculpture of the Risen Christ descending from a 9-meter wooden cross, both by Fr. Segundo Gutierrez, a Claretian priest from Spain.

The church also houses narra sculptures of the Stations of the Cross by National Artist Napoleon Abueva.

Parish of the Holy Sacrifice

University of the Philippines-Diliman

Located on the University of the Philippines campus at Diliman, the Parish of the Holy Sacrifice features the famed double crucifix by National Artist Napoleon Abueva and floor design by National Artist for Visual Arts Arturo Luz.

A university chapel served the UP community in the early 1950s until the construction of a new chapel, which was funded through contributions from community members. The first Mass there was said on Dec. 21, 1955, by the Archbishop of Manila.

The chapel was elevated to a university parish by Jaime Cardinal Sin in May 1977.

Established on Jan. 9, 1981, by Cardinal Sin, Santa Maria Della Strada Parish Church is named after Sta. Maria della Strada (Our Lady of the Way), at whose wayside shrine St. Ignatius used to stop and pray to honor the Jesuits who contributed a lot to the community.

Among the church’s features are the precious marble altar table used by Pope John Paul II during the beatification of San Lorenzo Ruiz; the life-size Crucifix with a brown Christ above the main altar; the Italian mosaic icons of Sta. Maria della Strada and St. Joseph; and the simple Blessed Sacrament Chapel. 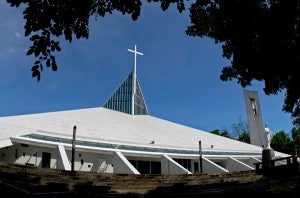 Church of the Gesu in Ateneo De Manila University. RICHARD A. REYES

Church of the Gesu

Located on the Ateneo de Manila University campus in Quezon City, the Church of the Gesu sits on a 10,200-square-meter property on Sacred Heart Hill, believed to be the highest point in Loyola Heights.

The church, which can seat 1,000 people, also has side chapels dedicated to the Immaculate Conception of Mary and the Sacred Heart of Jesus. Around the chapel are statues of Jesus—one depicting him with outstretched arms, and one depicting the Agony in the Garden.

Our Lady of Pentecost Parish

The present church of Our Lady of Pentecost Parish is a far cry from its beginnings in 1999, when weekend Masses were celebrated in the barangay covered court while weekday Masses were held in the garage of a borrowed house.

After three years, a modest house on F. de la Rosa hosted the parish until 2003, when the church finally acquired its present site. 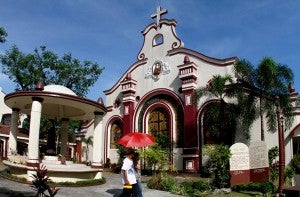 After Mother Jeronima’s death in 1630, the monastery was moved from one place to another, until it was transferred to its present location in Quezon City on Feb. 20,1950.

Devotees have continued the tradition of offering eggs to the monastery.

Claras is Castilian for “short interval of fair weather on a rainy day.”

In Spanish, clara means the white of the egg.

To this day, white eggs are offered to Santa Clara in exchange for fair weather for a particular date.

Eggs are said to be used in making bread to be given to the poor.

People can also write their prayer intentions and ask the nuns of the Order of Saint Clare of Assisi to pray for them. 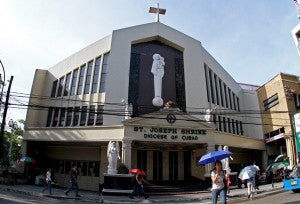 St. Joseph Parish was conferred the title of Archdiocesan Shrine of St. Joseph and was blessed in 1999.

The original church was built in 1951 and was renovated in 1978. It is now at the center of a vibrant parish life expressed in various apostolates and community activities that include formation and social development programs. 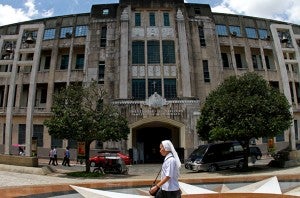 On April 26, 1942, Manila Archbishop Michael O’Doherty canonically inaugurated the UST Chapel into the Santissimo Rosario Church, a stone edifice located in the heart of the university campus.

The church is the venue for religious activities of the university: The traditional Misa de Apertura, which officially opens the academic year with a Mass of the Holy Spirit and the academic lecture Discurso de Apertura; the annual novena to Our Lady of the Most Holy Rosary for the La Naval celebration; and the Heritage Christmas Concert.

Rough stone walls are a notable feature of the church. The church faces a tree-lined field and the grandstand. Nearby is Calderon Park, also a popular hangout among students.

The first Sta. Cruz church was built by the Jesuits in 1608 for the growing community of Chinese Christian converts in Manila. Its titular patroness is the Nuestra Señora del Pilar (Our Lady of the Pillar), whose image was brought from Spain before 1768.

The original structure was damaged by two major earthquakes before it got totally destroyed in World War II. The present edifice, reflecting Baroque influences, was completed in 1957. It is in the process of finishing its most recent renovation. 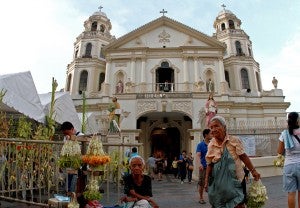 Also known as St. John the Baptist Parish, the Quiapo Church is officially known as Minor Basilica of the Black Nazarene, and is home to the much venerated image of a dark-skinned Christ, which devotees believe to be miraculous.

The first church of Quiapo was built by Franciscan missionaries in the 16th century. The church underwent a number of rebuilding and repairs through the years, but the Mexican Baroque edifice was destroyed by fire in 1928. The present edifice is a result of a remolding in 1984, intended to accommodate thousands of devotees.

Inaugurated in August 1891, San Sebastian Church is the only neo-gothic steel church in Asia.

The church’s steel parts were manufactured in the Societe Anonyme’s foundry in Binche, Belgium, and took two years for local craftsmen to assemble. Its stained glass windows came from Germany. Works of Filipino artists Lorenzo Guerrero and Eulogio Garcia adorn the church and reflect its gothic revival spirit. 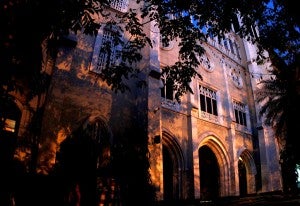 Abbey of Our Lady Of Montserrat in Mendiola, Manila. RICHARD A. REYES

Abbey of Our Lady of Montserrat

The Abbey of Our Lady of Montserrat, which serves as the chapel of San Beda College, was built in 1904 by Swedish architect George Asp and was devoted to Sto. Niño de Prague.

The church houses paintings of Spanish monk Fr. Lesmes Lopez, OSB, which include the 16 allegories on the virtues, theology and the Church on the vaulted ceiling of the nave; “The Apotheosis of the Holy Name of Jesus” over the sanctuary; eight panels on the Nativity of the Lord on the walls of the sanctuary, and the Fourteen Stations of the Cross.

Completed in October 1960, St. Jude Parish was among the churches built for the growing community of Chinese Christians in Manila. Named after the patron of hopeless cases, the church is swarmed by devotees who include students and board examination reviewees.

In June 1994, the church was conferred the title of Archdiocesan Shrine of St. Jude. 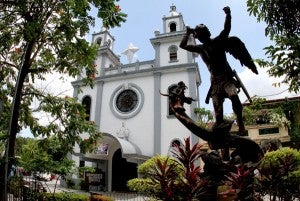 Dedicated to St. Michael and the Archangels, San Miguel Church was built in 1611 and later ministered to Japanese Christians persecuted under the Tokugawa Shogunate.

The present church was built in 1913, and served as the temporary cathedral of the Archdiocese of Manila while the Manila Cathedral was being rebuilt from 1946 to 1958. The church became the National Shrine for the Archangels in 1986.