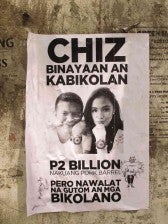 LEGAZPI CITY— With the recent controversy involving him, his girlfriend Heart Evangelista and her parents, this poster of Bicolano Senator Francis Escudero is catching the eye of some passersby along Rizal Street in Barangay (village) Sagpon here.

The black-and-white poster, which is about the size of a one-fourth cartolina, has a photo of Escudero and Evangelista, and the text “Chiz binayaan an Kabikolan. P2 billion nakuang pork barrel pero nawalat na gutom an mga Bikolano (Chiz neglected Bicol. Got P2-billion pork barrel but left the Bicolanos hungry).”

It also has a drawing of a kneeling skeleton on its left side and a devil carrying a pig on the opposite side.

A worker from a nearby maker of sportswear, who refused to be identified, said he did not notice when the poster was placed on the wall, which is just a few steps away from  Bicol University.

According to him, it was the only one he saw in the area. No other similar poster was seen in the main road from downtown Legazpi to the university, which has a distance of around 5 kilometers.

On Friday, the Team PNoy senatorial candidates visited this city for a sortie. However, Escudero, a native of Sorsogon province, was not seen.

Escudero has also made himself scarce in other Team PNoy sorties in the other areas of Albay between Friday and Saturday.

On Thursday, Escudero briefly appeared during a gathering of local Liberal Party (LP) candidates in Naga City but left before President Aquino came to proclaim the LP bets in Camarines Sur.

While speaking before local LP bets, Escudero acknowledged he was “at the center of a controversy” but did not talk about it.

He instead asked the party’s local candidates for their support despite the controversies. Compared to the other Team PNoy senatorial candidates, Escudero has also one of the fewest tarpaulins and posters seen in this city. With reports from Mar Arguelles and Juan Escandor Jr., Inquirer Southern Luzon