For Pope’s security, ‘unpredictable’ is trouble 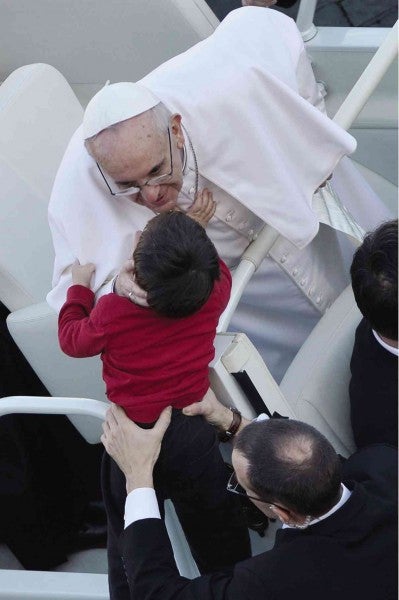 Pope Francis reaches out to kiss a child in St. Peter’s Square on Tuesday, March 19, 2013, as he officially begins his papacy. For the new Pope, it may all boil down to balancing legitimate security concerns with his down-to-earth manner and distaste for luxury. AP

One Pope was shot in St. Peter’s Square while riding in an open vehicle. Another was tackled by a woman with mental problems in St. Peter’s Basilica.

So in the early days of Francis’ pontificate, as the Pope delights the flock by wading into crowds and pressing the flesh, it’s only natural that chief Vatican cop Domenico Giani seems on edge.

Just consider some of Francis’ acts of papal outreach, which have all made for a refreshing change from the reserved style of his predecessor Pope Benedict XVI, but present a huge headache for a security detail attached to one of the planet’s most high-profile people.

The day after his election, Francis eschewed the Vatican’s armored limousine and traveled through the chaotic streets of Rome in an ordinary car to pick up his things at a downtown hotel.

At his first Sunday Mass as Pontiff, Francis caused a stir by mingling with bystanders at a Vatican gate, shaking hands and even allowing himself to be grabbed by the shoulder, all while people jostled to get closer.

Then on inauguration day, Francis stood for nearly 30 minutes on Tuesday in an open vehicle that circled the vast square, kissing babies handed up to him and at one point jumping out to bless and kiss a disabled man in the crowd.

It’s not for nothing that Francis has quickly been dubbed the “unpredictable” Pope. And for a bodyguard, unpredictable means trouble.

Giani looked particularly worried by the crowd that gathered after the Sunday Mass. La Stampa newspaper quoted an aide at the scene as saying that things “better get back to normal or we’re in trouble.”

The Vatican spokesman, the Rev. Federico Lombardi, said last week that the Vatican was well aware of Francis’ informal and open style and that “proper security measures” would be taken, even if that hasn’t happened immediately.

“There are a lot of nut cases out there,” said another Vatican official, who requested anonymity as he is not authorized to discuss security.

“But you can be sure that the security issues are being examined.”

After Mass on Sunday, it seemed as if one of the monsignors was begging Francis to hurry up, as he nervously looked at his watch—but the Pope kept diving into the crowd.

Francis’ meet-and-greet manner is reminiscent of John Paul II’s open style in his first years as Pope. And an iconic event in the earlier papacy brought to light some of the terrifying potential consequences of papal spontaneity.

It was 1981 and John Paul had just handed a baby back to her mother, as his open jeep drove slowly through a crowded St. Peter’s Square. Shots rang out. The Pope crumbled and bodyguards swarmed around him.

The Turkish gunman’s assassination attempt left John Paul severely wounded. While he made a full recovery, an era of light security was over.

In 2008, a German man jumped on the Pope’s jeep and had to be wrestled down by a Vatican policeman. Two years later, a woman with a history of psychiatric problems jumped the security barricade in St. Peter’s Basilica during Christmas Eve Mass and pulled Benedict to the ground.

The Pope was uninjured but a cardinal fell and broke his hip.

Not an ordinary leader

Experts say that ditching the motorcade and the security detail can be dangerous in unexpected ways.

“If someone like the Pope publishes the fact that he doesn’t have the usual level of security, it only highlights the potential threats,” said British security expert Richard Aitch, the author of “Close Protection.”

Aitch, whose résumé lists work for royalty, diplomats and other VIPs, cited the example of British Prime Minister David Cameron, whose decision to forego motorcycle outriders drew concern after his official car was pictured caught in London’s slow-moving traffic a few years ago.

Such a situation could basically turn him into a sitting duck for any potential attacker.

In general, Aitch said that any leader’s decision to drop his guard “creates a security headache”—particularly if it becomes a habit.

And the Pope isn’t just any leader, he’s one of the most public figures in the world.

During an ordinary week, the Pope makes a minimum of two appearances, at his general audience Wednesday and from his apartment window for his Sunday blessing.

For the new Pope, it may all boil down to balancing legitimate security concerns with his down-to-earth manner and distaste for luxury.

Francis, for example, famously rode the bus to work while he was archbishop of Buenos Aires.

While that casual style will likely stay, don’t expect to meet him in one of the ubiquitous trams that snake through Roman streets.