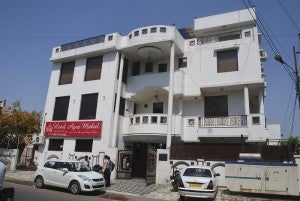 The Hotel Agra Mahal is seen in Agra, India, Tuesday, March 19, 2013. A British woman traveling around India jumped out of the third-floor window of her hotel room on Tuesday after the hotel’s owner tried to force his way into the room, causing her to fear she was about to be sexually assaulted, police said. AP PHOTO/PAWAN SHARMA

NEW DELHI—Danish tourist Judith Jensen has a long list of don’ts to help her feel safe during her holiday in India.

She won’t hail a taxi off the street, she won’t stay in an obscure hotel and she won’t go out after dark—all decisions made in response to the growing reporting of sexual crime in the country.

“I have read and heard so much about rape in India that now I feel this persistent sense of danger,” Jensen, 42, told AFP as she walked through a popular market in downtown Delhi.

The tourism ministry’s ubiquitous Incredible India marketing campaign has helped raise the number of foreign visitors over the past decade to around 6.6 million a year—albeit still way behind the likes of China and Malaysia.

But that push is now hampered by a growing sense that India is simply not a safe destination, particularly for women.

The fatal gang-rape of an Indian student in December shone a disturbing light on the level of sexual violence and a series of subsequent attacks on foreigners has added to the sense of unease.

A British holidaymaker in the northern city of Agra, home to the Taj Mahal, suffered a leg injury when she jumped out of a hotel window before dawn on Tuesday.

Police said she feared a sex attack after two men tried to enter her room.

Last Friday a Swiss woman was gang-raped while on a cycling holiday in central India. Her husband was tied up by the gang, which is also accused of stealing a laptop, a mobile phone and 10,000 rupees ($185).

On the same night a group of men in a city near Delhi briefly kidnapped an Indian male executive working for the French engineering giant Alstom.

Other incidents reported since the December gang-rape include that of a South Korean student who said she had been raped and drugged by the son of the owner of the hotel where she stayed during a holiday in January.

A Chinese woman working in Gurgaon, a town bordering the Indian capital, was also reportedly raped by an acquaintance last month.

Indian officials say there is no need for alarm, pointing out that foreigners are victims of crime the world over and the vast majority of visitors experience no safety problems.

But travel advice from a host of countries stresses the need for visitors to take care.

An advisory from the Swiss foreign ministry, issued before Friday’s attack, urged men and women visiting India to travel in large groups and with guides.

Britain’s foreign office updated its advisory for India on Tuesday, warning female tourists to “exercise caution when traveling in India even if they are traveling in a group.”

In a notorious case five years ago, 15-year-old British schoolgirl Scarlett Keeling was raped and left to die on a beach in the tourist resort of Goa.

Jensen, who stands out in an Indian crowd with her blonde hair, recalled how she spent a carefree week backpacking around southern India a decade ago.

But now, traveling with her 10-year-old daughter, it is a different story and her husband texts her several times a day to check on their safety.

“There is no question that these stories will have an impact on foreign visitors,” she said.

“Women will prefer to visit other places like Singapore or Bali or Thailand, where safety is not such a big concern.”

At the Delhi office of the Indian Association of Tour Operators, executive director Gour Kanjilal said it was unfair to portray India as dangerous.

“Our industry is the first casualty when crime against foreigners is reported in India, but the reporting does not always reflect the truth,” he told AFP.

“Tourists should be responsible. They should follow some do’s and don’ts.”

A state minister in Madhya Pradesh, where the attacks on the Swiss and South Korean tourists took place, told reporters on Sunday that travelers must inform local police officials whenever they move from one town to the next.

That suggestion is hardly realistic for most tourists like 26-year-old Peruvian Marilu Labarthe, who squeezed in visits to seven cities during a two-week trip to the country.

Labarthe, shopping for ethnic trinkets in Delhi on the last day of her vacation, traveled to the country with 11 other women.

“You have to always be careful. And after hearing of these recent incidents, one obviously feels a sense of fear,” she said, as one of her companions nodded in agreement.—Ammu Kannampilly