A ‘David’ steps up vs Binays 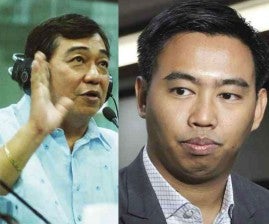 RENATO Bondal, lone challenger of Makati City Mayor Jejomar “Erwin’’ Binay Jr. (right), explains in a Radyo Inquirer interview why he can be a viable alternative who could end a 27-year-old political dynasty. ARNOLD ALMACEN

It will not just be a case of “David against Goliath” in the Makati City elections this May, according to the lone challenger of Mayor Jejomar Erwin “Junjun” Binay Jr.

“If we win this election, gone are the 2016 dreams of the Binays,” said lawyer Renato Bondal, alluding to the reported plans of Junjun’s father, Vice President Jejomar Binay, to seek the presidency three years from now. Junjun’s eldest sibling Nancy is currently running for senator.

“It seemed to be taking forever and I won’t allow it,” Bondal said on Monday in an interview on Radyo Inquirer, referring to the seemingly “never-ending” political dynasty that since the mid-1980s has ruled the city which hosts the country’s premier business district.

Bondal, 52, used to be an ally of the Binays when he was chairman of Barangay (village) Palanan from 1993 to 1998. He said he decided to break away when Jejomar, then the city mayor, fielded his wife Elenita in the 1998 mayoral race and severed his ties with then Vice Mayor Arturo Yabut.

With Yabut as his mayoral candidate, Bondal ran for councilor in 1998 but lost. He again failed to win a seat in the city council in 2010, when Junjun took over his father’s city hall post.

But despite losing twice, Bondal remained hopeful that his third bid could end the Binays’ dominance since 1986 or back when Jejomar was appointed officer in charge of Makati City by then President Corazon Aquino after the Edsa People Power Revolution.

In various interviews, Vice President Binay defended himself and his family against criticism by saying that theirs had been “a dynasty of service.”

Sought for comment, a spokesperson for the Binays on Tuesday said that “in the end, it is up to the people to decide who they want to lead them. It’s a choice between Junjun Binay, who has three years of experience as a mayor, and Attorney Bondal.”

“Look at what this dynasty has done. Look at how Makati dramatically changed from a mere municipality to a premier city that it is now. That alone speaks for itself,” said Joey Salgado, chief of the city’s public information office.

“We wish Bondal all the luck if that is his dream. But the dreams of Makati residents are different altogether,” Salgado said.

Bondal is running as an independent candidate, with the incumbent Vice Mayor Romulo “Kid” Peña as his running mate. Peña is up against Marjorie de Veyra, the former city administrator.

Bondal believes that the odds are better for him this time since it will only be a two-way fight between him and Junjun Binay.

“Since 1987, there had been more than two mayoral candidates in Makati. This time would be a dangerous situation for them,” he said. He recalled that in the 2010 elections, for example, the combined votes for Binay’s two challengers—Erwin Genuino and Ernesto Mercado—were greater than the votes the incumbent mayor got.

He said the people of Makati will eventually look for an alternative. “We have no tarpaulins yet, but the people will find us.”

Instead of holding big rallies, he and Peña will just go “from house to house” at the start of the campaign period for local candidates on March 29.

Asked about his platform of government, Bondal criticized the Binays for allegedly “abandoning” Makati claim on seven barangays which have been the subject of a jurisdiction dispute with Taguig City in a Pasig City court. He was referring to Barangays Cembo, South Cembo, West Rembo, East Rembo, Comembo, Pembo and Pitogo.

Bondal also pushed for the use of biometrics in the City Hall payroll system as a safeguard against so-called “ghost employees.”

“If we win this election, we will build decent houses for Makati residents and not shun them away,” he said, saying local revenues should be spent on welfare and development in the city and not on Makati’s co-called “sister cities” across the country whose numbers grew during the administration of the Binays.