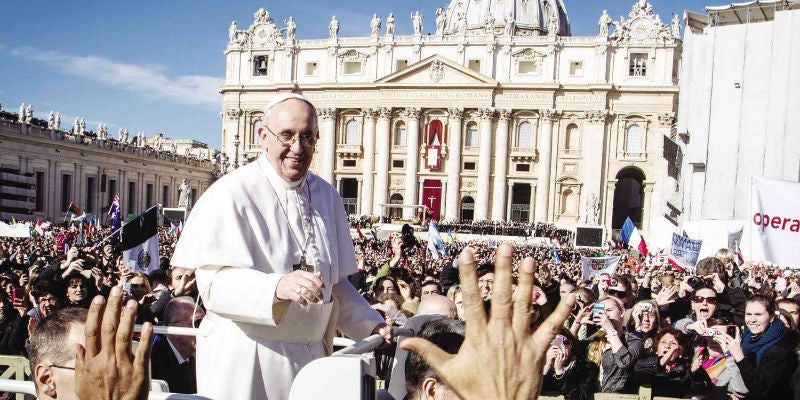 ROCK STAR Pope Francis is received like a rock star by tens of thousands as he’s driven in his popemobile at St. Peter’s Square before his inaugural Mass. AP

VATICAN CITY—Tens of thousands, including sovereigns and representatives of 180 countries, witnessed the highly dramatic investiture of Pope Francis in St. Peter’s Square on Tuesday, as past, present and future converged for a Church seeking to go back to the basics of the Christian message in dealing with what its critics call a problem of relevance.

Addressing an estimated 200,000 people including foreign leaders in St. Peter’s Square, Pope Francis, his voice raised in emotion, said a pope must “embrace with tender affection the whole of humanity, especially the poorest, the weakest, the least important.”

The Church’s mission “means respecting each of God’s creatures and respecting the environment in which we live. It means protecting people, showing loving concern for each and every person, especially children, the elderly, those in need, who are often the last we think about,” Pope Francis said in his investiture homily.

To lusty cheers, Pope Francis went around St. Peter’s Square in the pope jeep at the start of the ceremony, waving and blessing well-wishers.

Hundreds of flags from Francis’ native Argentina were waving in the square, along with the Vatican’s yellow-and-white standard and the flags of countries with dominant Catholic populations, as the former Cardinal Jorge Mario Bergoglio of Buenos Aires smiled warmly.

Also waving were flags from Argentina’s neighbors—Mexico, Colombia, Peru, Ecuador, Brazil, and others—indicating the shift of the papacy from the Old World of Europe to the New World of the Americas.

Asian and African churches were also represented. Aside from staunchly Catholic Philippines, there were flags of South Korea, Sri Lanka and Kenya.

Francis succeeded Benedict XVI, the former Cardinal Joseph Ratzinger, a German, who stunned the world last month by announcing he was renouncing the papacy due to old age.

Benedict himself succeeded Pope John Paul II, the first Polish Pope whose election in 1978 broke the Italian hold on the papacy for centuries.

But Francis’ election could also be viewed as an Italian restoration since he has Italian blood.

The former Buenos Aires Archbishop, whose parents hailed from Italy, said he chose to name himself after St. Francis of Assisi because of his “spiritual ties with this land.”

The saint from Assisi, who founded the Franciscan Order that, together with the Dominicans, Augustinians and Carmelites, helped reform the Church in the Middle Ages, is the patron saint of Italy.

In his homily, the Pope made references to St Joseph, whose feast was being celebrated on the installation, as protector of the Church and to St. Francis as the patron saint of the environment in order to call for the “protection of creation.”

“Please,” the Pope said, “I would like to ask all those who have positions of responsibility in economic, political and social life, and all men and women of goodwill: let us be ‘protectors’ of creation, protectors of God’s plan inscribed in nature, protectors of one another and of the environment. Let us not allow omens of destruction and death to accompany the advance of this world!”

After the rock-concert-like reception of the crowd in the square, the “inizio” investiture ceremony was highly symbolic and dramatic.

Pope Francis went inside the basilica and descended to the tomb of St. Peter, traditionally known as the first Pope. He was accompanied by patriarchs of the Orthodox churches from the East, an indication of the growing rapprochement and unification between the churches of Asia Minor and the Latin West, which split in the 11th century.

The Pope, together with the Eastern patriarchs and the cardinals, then marched and was greeted by thunderous applause from the crowd.

As the prelates filed outside, the traditional Litany of Saints was chanted, with the inclusion of three canonized Popes who were considered reformists—Gregory VII (1073-1085), Pius V (1566-1572), and

Like Francis, who’s a Jesuit, two of the three canonized Popes were religious.

Gregory VII was a Benedictine monk while Pius V was the Dominican Pope who rallied Europe against the Ottoman Turks in the Battle of Lepanto and who implemented the reforms of the Council of Trent to stem the Protestant revolt.

Pius V, known in Italian as Pio Quinto, was said to have continued wearing the Dominican simar even when he was already Pope so that the fashion tradition was passed on to the succeeding Popes, including Francis, who appeared on the loggia on March 13 with the Dominican cloak when he was introduced as the new Pope.

Francis also received the pallium, a wool tie-like collar that represents the Bishop of Rome as a shepherd and as a sacrificial lamb.

Francis also received the papal ring, known as the Fisherman’s Ring in reference to St. Peter, who was a fisherman.

The gold-plated silver ring bore an image of St. Peter holding the keys of heaven.

Vatican insiders told the Inquirer that the Pope had adopted the design of the ring of Pope Paul VI, who was Pope from 1963 to 1978, and who implemented the contentious reforms of Vatican II aside from issuing the controversial encyclical Humana Vitae, which banned contraception.

During the inizio, the liturgy had the people praying for the new Pope that he would “gather peoples as one through doctrine, in charity” and the people obey him.

The prayer might refer to the divisions plaguing the Church as a result of many Catholics, some of them theologians, demanding more liberal interpretations of Catholic norms amid modernity.

Among those witnessing the investiture were Cristina Fernandez de Kirchner, the president of Argentina who had criticized the Church and called it “medieval” after Bergoglio opposed her plan to pass a law legalizing same-sex marriages.

Starting in the late 15th century, Spain and Iberian rival Portugal colonized the Americas, in the process also evangelizing them, so that the South American continent now has the biggest concentration of Catholics in the world.

Also among the dignitaries were Vice President Jejomar Binay and Zairean President Robert Mugabe, representing Asia and Africa, promising mission continents for the Roman Catholic Church that claims its faith to be embraced by people universally.

Also present were top leaders of the Eastern Orthodox churches, other Christian denominations, and Judaism.

Later, six cardinals—two each from cardinal-deacons, -priests, and –bishops—swore fealty to Pope Francis, representing the allegiance of all of the cardinals, bishops and priests to the Vicar of Christ.

During the Mass to mark the solemnity (or feast) of St. Joseph, the earthly father of Jesus, the Gospel was read in Greek to better emphasize the bonds between the Catholic Church and its Eastern relations.

The two prior readings were in Spanish and English.

The Gospel reading, Matthew 1:16,18-21,24a, was about Joseph’s obedience in faith and trust, again emphasizing Francis’ call on Catholics to go back to the fundamental tenets of the faith and the need for heroic witnessing of Christianity.

To emphasize the universality of the Catholic Church, the traditional Prayers of the Faithful were read in Russian, French, Arab, Swahili and Chinese.

At the start of his homily, Pope Francis made a fond reference to his predecessor, noting that the Mass was for the feast of St. Joseph, after whom Joseph Ratzinger, who became Benedict XVI, was named.

He said the protection of creation should be the duty of all but would presuppose the spiritual conversion of everyone.

He explained that the protection should extend as well to the protection of the poor, making a reference to the reason why he chose Francis as his papal name—Francis who exalted poverty and simplicity.

To protect Jesus with Mary, the Pope said, “is to protect the whole of creation, to protect each person, especially the poorest, to protect ourselves: this is a service that the Bishop of Rome is called to carry out, yet one to which all of us are called, so that the star of hope will shine brightly. Let us protect with love all that God has given us!”

Helping distribute communion during the Mass were priests from Asia.

Fr. Paul Robinson, a Sri Lankan priest taking up doctoral studies at the Angelicum, praised the new Pope for his “down-to-earth ways,” which would make the Church “closer to the people.”

The two priests said that while they would welcome papal focus on the Asian churches, they understand that Pope Francis would have to prioritize the reform of the Vatican bureaucracy and deal firmly with scandals involving alleged hushed-up sexual abuse of children by pedophile priests mainly from the West.

Pope Francis has indicated he would deal with the problems facing the Church by emphasizing fundamental “witnessing” of the faith.

In his first homily as Pope on March 14, he told cardinals, “(I)f we do not witness to Jesus Christ then … we might become a philanthropic NGO, but we wouldn’t be the Church, the Bride of the Lord.

“When we don’t build on rock, what happens? The same thing that happens to children when they build sandcastles on the beach. They wind up falling down because they have no solidity.”—With a report from Agence France Presse