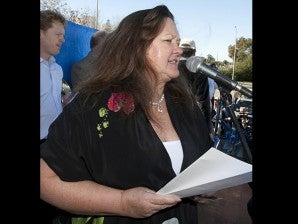 SYDNEY – The son of Australia’s richest person, Gina Rinehart, sought a Aus$15 million (US$15.4 million) “sorry payment” from his mother for how had she treated him over the years, a report said Wednesday.

Iron ore billionaire Rinehart is embroiled in a legal battle with two of her four children, including son John Hancock, over control of a family trust reportedly worth Aus$4 billion.

Hancock’s request is contained in documents tendered to the New South Wales Supreme Court as part of a dispute over the trust, set up by Rinehart’s father, the late Lang Hancock, in 1988, with the four grandchildren as beneficiaries.

Rinehart was due to be in charge of the trust, which holds a 23.4 percent slice of her company Hancock Prospecting, until the youngest grandchild turned 25 in 2011. Just days before, however, she said she wanted to alter the payout date to 2068 so they did not face a huge tax bill.

Emails between Hancock, his mother and her adviser tendered in court Tuesday show how he tried to come to a confidential agreement with Rinehart before the case went to court, the Sydney Morning Herald said.

In the emails Hancock said he would agree to delay vesting of the trust for an unspecified annual salary, while criticizing his three sisters’ ability to mount any kind of challenge.

“I doubt the other girls have the intellectual capacity to read the Income Tax Act which clearly defines that CGT (Capital Gains Tax) is disregarded under these circumstances, unless I… explain it in suitable baby language for them,” he wrote to his mother.

Hancock later demanded “a Aus$15m ‘sorry payment’ direct from GHR (Gina Hope Rinehart) for how she treated me over these last 15 years”.

Three of Rinehart’s four children, John, Bianca and Hope, originally took the mining magnate — worth an estimated US$17 billion — to court over her handling of the trust, arguing that she had breached her duties as trustee.

Hope officially withdrew from the legal action on Tuesday.

Also on Tuesday Rinehart took legal action against a journalist working for the Sydney Morning Herald, owned by Fairfax Media, of which she is the biggest shareholder with 15 percent.

At the request of the mining magnate’s company, the Supreme Court of Western Australia issued a subpoena against reporter Adele Ferguson, who penned a biography of the billionaire, demanding her emails, notebooks and recordings of interviews she has conducted with John Hancock since September 2011.

Fairfax reported that it appears Rinehart wants Ferguson to reveal her sources for the book, which was published last year.