In Cebu, VP sees no wrong in Church tarp 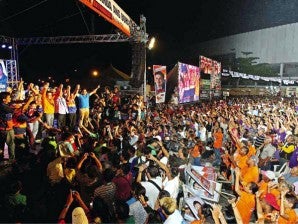 CANDIDATES of the United Nationalist Alliance (UNA), which has three candidates on the Bacolod Diocese’s list of Team Buhay candidates, hold a rally in Cagayan de Oro City that UNA officials said was attended by up to 50,000 people. CONTRIBUTED PHOTO

CEBU CITY—Vice President Jejomar Binay said the Team Patay-Team Buhay tarpaulin displayed in front of the San Sebastian Cathedral in Bacolod City could not be considered an endorsement of candidates.

Binay said the candidates listed on the tarpaulin came from different parties.

“The Church is only saying (that) these are the people who voted for the RH bill,” he said.

Seven senatorial candidates were tagged by the Bacolod diocese as members of Team Patay for supporting the reproductive health law.

Of the seven senatorial candidates on the Team Patay list, five belong to Team PNoy (Escudero, Legarda and Cayetano, Angara and  Hontiveros), one is an independent (Casiño) and the seventh, Enrile, is with the United Nationalist Alliance (UNA).

Of the six senatorial candidates listed on Team Buhay for opposing the RH Law, three belong to UNA. They are Sen. Gregorio Honasan, Rep. JV Ejercito and Mitos Magsaysay.

The other three—Cynthia Villar and Senators Antonio Trillanes III and Koko Pimentel—are with Team PNoy.

The Team Patay and Team Buhay list generated controversy after several candidates from both parties complained that the Church was violating the separation of Church and State.

But Church officials defended the list, saying it was part of the Church’s exercise of freedom of expression.

Binay was here to attend the 43rd birthday celebration of the Cebu CFI Community Cooperative.