Comelec control of Masbate being studied 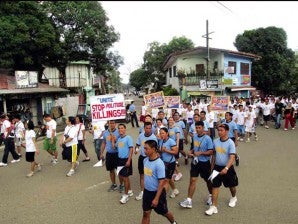 POLICEMEN join a walk for peace in the streets of Masbate recently that appeared to have been for naught following successive killings of candidates in the province. PHOTO FROM MASBATE PNP

NAGA CITY—The spate of killings of candidates in Masbate, all members of the Nationalist People’s Coalition (NPC), has alarmed the Commission on Elections (Comelec) and the party’s national leaders.

The Comelec on Tuesday said it may put the entire island-province under its control in the aftermath of two killings over the weekend.

NPC, in a statement, said the killings were obviously political in nature and are alarming.

Lawyer Noriel Badiola, Masbate election supervisor, said he would meet with the Philippine National Police and the Special Task Force Masbate tomorrow to assess if there’s a need to place the entire province under Comelec control.

Badiola said the Comelec is allowed by its rules to place an area under Comelec control in the wake of “serious armed threats.”

He said the Comelec did not want any area in Bicol to be under its control because that would require the use of additional manpower and resources.

But the murders last Saturday of Isagani Lupango, candidate for vice mayor of Mobo town, and on Sunday of Ladislao Macuja, candidate for councilor in Balud town, “affected Comelec predisposition,” said Badiola. He did not elaborate.

Senior Supt. Arnold Albis, head of Special Task Force Masbate, said he does not yet see the need to place the province under Comelec Control.